Parks need to be opened for survival of the sector 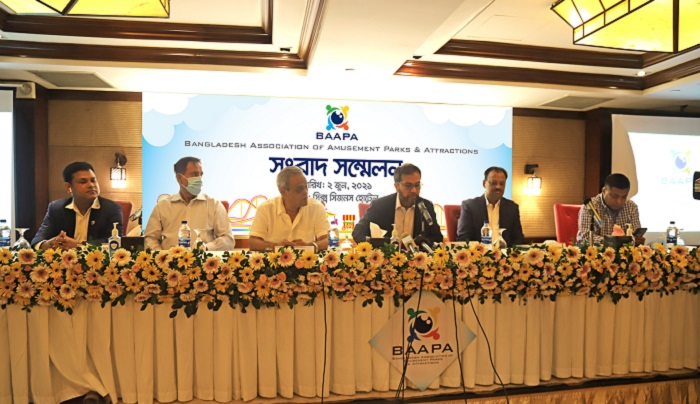 Bangladesh Association of Amusement Parks and Attractions (BAAPA) has demanded opening of parks across the country.

Perks are on the verge of extinction due to continuous shutdown amid the Covid-19 pandemic, said BAAPA.

Leaders of BAAPA held a press conference at the Six Seasons Hotel in the capital Dhaka on Wednesday to press home their demand.

The press statement is as follows:

In the early stages of the Corona phase, the government took appropriate steps to bring the situation under control and we, along with other businesses, closed the amusement parks as per the government's decision. At that time, the government decided not to allow the parks to open before the business season Eid, the companies were severely damaged, but we hoped to be able to overcome it in the future, but again in the second phase of the corona, infection increased again, the amusement parks and tourist centers were closed down again.

The industry is once again facing business and financial losses. If these amusement parks are not opened now like other business, it will be almost impossible for these establishments to survive or turn around.

We believe that this time too, due to the decision taken by the government, the government will be able to cope with the push of the 2nd stage like the 1st stage of Corona. At the same time last year, other businesses opened on time, but the decision to open amusement parks was made much later, and the sectorhas suffered greatly. Even then, the Bangladesh Association of Amusement Parks and Attractions (BAAPA) agreed with all the decisions of the government considering public health.

According to the decision of the Hon'ble Prime Minister, life and livelihood should be run together. That is why we have decided to enter less than 50% of the park's capacity as per the decision of Bangladesh Tourism Board and various international organizations and to maintain their social distance by installing thermal scanner outside the main entrance of the park, using hand sanitizer. We have ensured adequate hand washing, regular food courts and sanitation of rides as well as all measures to prevent corona virus infection in accordance with the Health Rules of the Department of Health and the guidelines of the Bangladesh Tourism Board and we have been operating the parks to ensure that. Although we talked about less than 50% of the visitors, in reality even 20% of the capacity visitors do not come now.

A recent report in the Lancet, a well-known medical journal in New York, found that coronavirus infections were less common outside the home. Considering that amusement parks are located in open spaces, the chances of infection from here are much less. It is possible to provide services to the visitors from a distance of more than 6 feet which is not possible to maintain in other sectors.

I would like to inform you that there is a lot of investment and bank loans in the entertainment and tourism sector. Many entrepreneurs in the sector will not be able to repay their bank loans properly as the sector has been closed for a long time during the lockdown, so there is a risk that a large part of it will default. If this sector is closed, it will not be possible to pay the salaries and allowances of all the officers and employees on time and there is a possibility of dismissal of many officers and employees.

At the same time, the livelihood of millions of families directly and indirectly involved will become more difficult day by day. Note, for sectors affected by last year's lockdown

Immediate government decision is required to open the parks like other sectors as soon as possible in compliance with the health regulations. It is worth mentioning that in open spaces like Cox's Bazar, Kuakata beach or hilly districts where visitors cannot control social distance and hygiene, it is possible to control visitors in privately run entertainment centers, control their social distance or hygiene. We have managed the parks properly as per the guidelines. So, we think it would not be fair to judge privately invested amusement parks in the same light as those tourist centers. Also, the water in all the water parks in Bangladesh is filtered by chlorine, and the water mixed with chlorine is a barrier to corona virus infection (Source: International Association of Amusement Parks and Attractions).

In this situation, it is very important to implement the following proposals in the interest of survival and self-reliance of the amusement parks located in the country:

1. Immediately open amusement parks as per the decision taken to open other sectors / institutions.

3. Exemption of VAT, supplementary duty and other taxes on amusement parks for the next 5 years to ensure services to tourists and visitors at a relatively low cost.

4. Provide VAT and duty-free import opportunities on various imported rides and other equipment for construction of new amusement parks and addition of existing facilities in the next 5 years.

5. To provide loan at 1% interest in the interest of keeping the working capital uninterrupted.