Saint Petersburg: The City always gorgeous in day and night 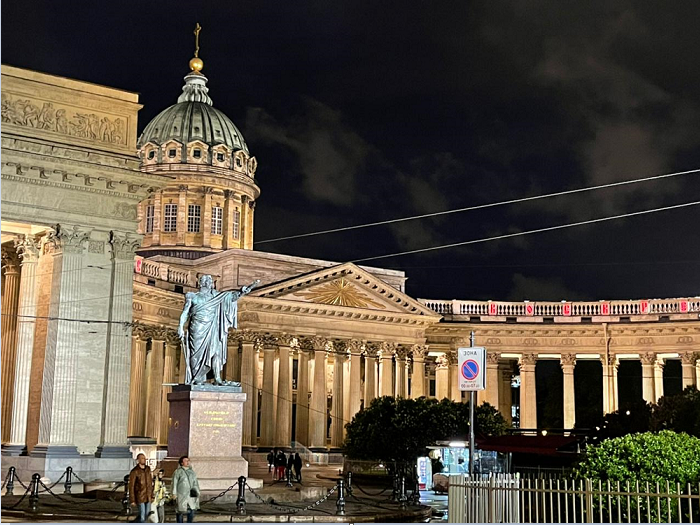 Honestly speaking, Travel is the best medicine for every human life as it can relief from lots of depressions & boringness. Today I will share my recent memorable travel story which might be help for your next travel plan. I am talk about the city which is called mini Europe & always look gorgeous in day & night, yes Its Saint Petersburg which is located in Russia. Why am I called it mini Europe? Well, If you visit that place one time, you will surely feel like you are not coming in Russia, you are roaming in Europe. It’s a 300 years old & a Russian port city on the Baltic Sea, founded in 1703 by Peter the Great, was the capital of Russia for two centuries and has witnessed some of the most important events. The city is often called “Venice of The North” because of its beautiful & attractive architecture. Here I am sharing some of the most popular tourist places – The Saviour On The Spilled Blood Cathedral, Dom Knigi ( House Of The Book ), The Kazan Cathedral, The Grand Peterhof Palace, Moving Bridges, The Winter Palace (Previous name the Hermitage Museum), & River Cruise.

The Saviour On The Spilled Blood Cathedral- It’s a former Russian Orthodox church in St.Petersburg, which currently functions as a secular museum. The structure was constructed between 1883 and 1907. It is now one of the most major tourist attraction place in St.Petersburg. Unfortunately I couldn’t go to the inside of this place because that time was heavy raining. However, may be next time!!! Please Note it, to see the Museum, entry fee starts 500 Ruble.

Dom Knigi ( House Of The Book )-  St. Petersburg’s largest and most famous bookshop, Dom Knigi ( House of the Book) occupies one of the most beautiful buildings on Nevsky Prospekt, directly opposite the Kazan cathedral, an innovative & richly decorated Art Nouveau Masterpiece. It is recognized as a historical landmark. During the first World War, the US Embassy was briefly located on that building. In 1919, not long after the October Revolution, the building was given to the Petrograd State Publishing House. It quickly became the city’s largest bookstore, and was subsequently named “The House Of Books”. 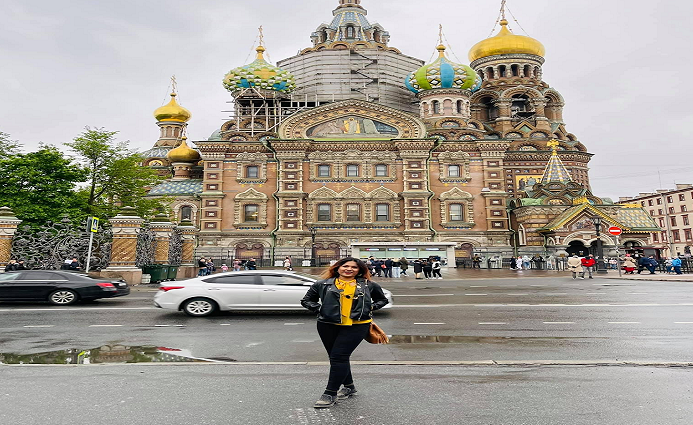 The Kazan Cathedral- Also its known as the Cathedral of Our Lady of Kazan, is a Russian Orthodox Church on the Nevsky Prospekt, St. Petersburg. It is dedicated to Our Lady of Kazan, one of the most venerated icons in Russia. It is one of the largest empire style temples of St. Petersburg. The cathedral was constructed in Nevsky Prospeky from 1801 till 1811 by architect A.N. Voronikhin by order of Emperor Paul I, who wanted the cathedral to resemble St. Peter’s Basilica in Vatican. Before it on the place of the cathedral a church was built in 1733-1737 by the architect M.G. Zemtsov. Whenever you visit there, don’t miss to see the night view of The Kazan Cathedral as its always glowing in day & night time.

The Grand Peterhof Palace- If you go to St. Petersburg but don’t visit that place, then your travel experience will be worse!!! So, don’t miss to visit this gorgeous place. The Peterhof Palace is a series of palaces and gardens located in Petergof, Saint Petersburg, Russia, commissioned by Peter the Great as a direct response to the Palace of Versailles by Louis XIV of France. Originally intending it in 1709 for country habitation, Peter the Great sought to expand the property as a result of his visit to the French royal court in 1717, inspiring the nickname of "The Russian Versailles". The architect between 1714 and 1728 was Domenico Trezzini, and the style he employed became the foundation for the Petrine Baroque style favored throughout Saint Petersburg. Also in 1714, Jean-Baptiste Alexandre Le Blond, likely chosen due to his previous collaborations with Versailles landscaper André Le Nôtre, designed the gardens. Francesco Bartolomeo Rastrelli completed an expansion from 1747 to 1756 for Elizabeth of Russia. The palace-ensemble along with the city center is recognized as a UNESCO World Heritage Site. Today, the Grand Peterhof Palace is a unique historical and art museum, the collection of which totals about three and a half thousand exhibits. The entry fee is 1000 Ruble.

Drawbridges (Moving Bridges) - The Drawbridges (Moving Bridges) of St. Petersburg are the most spectacular, so much so that their opening at dawn has become a real tourist attraction of the city, with many night cruises sailing the Neva River to get a close up view of them opening. Many people think that drawbridges open for tourists. But the truth is that the bridges of St. Petersburg open at night to make way for the large tonnage vessels coming from the Volga heading towards the Gulf of Finland and the Baltic Sea (or ships making the reverse journey). So the Neva River is the last section of the Volga-Baltic canal built during the Soviet era for the passage of river boats from inland Russia to European ports. 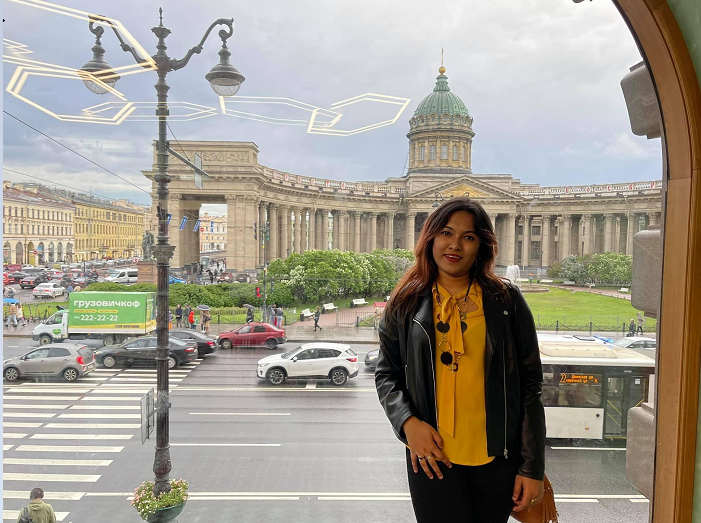 The Winter Palace (Previous name the Hermitage Museum) - The Winter Palace served as the official residence of the Russian Emperors from 1732 to 1917. As of 2021 the palace and its precincts form the Hermitage Museum. Situated between Palace Embankment and Palace Square, in Saint Petersburg, adjacent to the site of Peter the Great's original Winter Palace, the present and fourth Winter Palace was built and altered almost continuously between the late 1730s and 1837, when it was severely damaged by fire and immediately rebuilt. The storming of the palace in 1917, as depicted in Soviet propaganda art and in Sergei Eisenstein's 1927 film October, became an iconic symbol of the Russian Revolution. Its my bad luck because I also didn’t visit the inside as it was under working. So, I clicked some photos from outside. But note it, The Entry fee is 1000 Ruble.

River Cruise (Boat Trips and Sightseeing Tours) - Once the summer comes (usually by the end of April), a boat trip is an essential part of any sightseeing holiday to St. Petersburg. There's a huge choice of boats and operators, ranging from small private launches to multi-level river cruisers, so you can join a timetabled tour or organize your own if you're travelling in a small group. Nearly all boats, however, follow one of a few tried and tested routes along St. Petersburg's rivers and canals, as well as some longer routes out to the city's suburban visitor attractions. Inner-city tours start from around 700 rubles for adults (half-price for children under 12, and free for children under seven). While it may be better to book a boat trip in advance, especially in high season during the White Nights, it is normally quite possible to turn up at one of the moorings in the city center (where Nevsky Prospekt crosses the Fontanka River, the Griboedov Canal, or the Moika River; in the Mikhailovsky Garden; on the Admiralty or Palace Embankments; or around the Peter and Paul Fortress) and join a tour immediately, day or night (after midnight nearly all boats offer trips out into the Neva River to watch the bridges opening).

Last but not least, my heart is melted to view this beautiful city as it’s a mini Europe !!! I didn’t want to come back as I was fell in love with this city. If you are interested, June is the best time for visiting there as you can see & enjoying the white night. I was visited with my 3 other friends on 20th of May from Voronezh Oblast as I am living & studying in Master’s Program in World Economics & Finance here, that time the weather was too rainy & bad that’s why couldn’t watched all things. So, I wish again I will visit that place on next year, especially for visiting The Winter Palace & other Museums.