Screening of the Film 'The Salt in our Waters 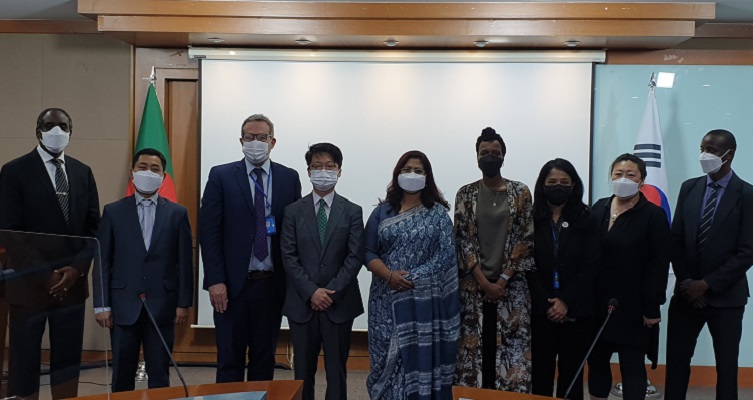 Ahead of the World Environment Day-2021 set for June 5, the Embassy of Bangladesh in Seoul in collaboration with UNDP Seoul Policy Centre and Korea University screened a film titled ‘The Salt in our Waters’ at the International Studies Hall of Korea University on Tuesday.

The film is directed and produced by renowned Bangladeshi Director Rezwan Shahriar Sumit. Diplomats, representatives from the World Bank and students were present at the event.

Dr. Stephan Klingebiel, Director of the UNDP Seoul Policy Centre, and Professor Suh-Yong Chung from the International Studies Division of the University of Korea, spoke at the event, said a press release of the Bangladesh Embassy in Seoul.

While discussing the background of the film, they highlighted the challenges posed by the global climate change including the various initiatives of UNDP and the University of Korea to address its adverse effects.

In her welcome address, Bangladesh Ambassador in South Korea Abida Islam, referred to the ‘whole-of-society approach’ and ‘a whole-of-world attitude’- proposed by the Hon'ble Prime Minister of Bangladesh at the recently concluded '2021 P4G Seoul Summit' and highlighted various initiatives of the Bangladesh government to address the adverse effects of climate change.

She also elaborated on the activities of Bangladesh as the Chair of the Climate Vulnerable Forum and as the host country of the South Asian office of the Global Center on Adaptation.

After the screening, the Director and Producer of the Film Rezwan Shahriar Sumit and Co-Producer Ilann Girard, who were connected virtually, responded to the queries of the participants. The film, which depicted the direct and indirect effects of climate change, was highly admired by the audience.