Despite his predictions, Trump won't simply be reinstated as president 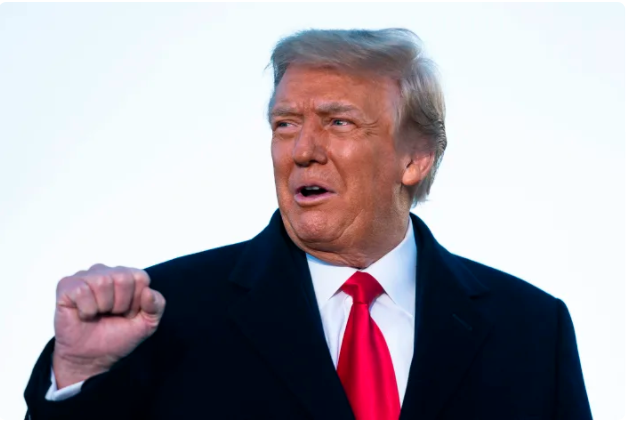 Former President Donald Trump is reportedly setting his sights on a quick return to the White House.

New York Times reporter Maggie Haberman tweeted Tuesday that Trump has been telling confidants that he expects to be reinstated as president by August as a result of ongoing election audits in states like Arizona and Georgia.

While there is no constitutional or legal remedy to overturn the results of an election once the Electoral College votes have been certified by Congress, Trump appears to be betting that the findings from highly partisan audits might somehow convince enough people of his bogus claim that fraud cost him the election.

A Yahoo News/YouGov poll released last week found that 64 percent of Republicans believe that the 2020 election was "rigged and stolen from Trump," but the courts have not been as kind to the former president, almost unanimously turning back his legal challenges to the results (Trump's lawyers won a single case in Pennsylvania that did not affect the final results). Recounts and official audits of the votes in several states have also failed to overturn President Biden's victory in both the popular vote and the Electoral College.

None of those points have seemed to deter Trump or his ardent supporters from the mistaken belief that he will be restored to power. How will this happen? At a QAnon conference held over the weekend in Dallas titled "For God & Country Patriot Roundup," some theories emerged.

Sidney Powell — the lawyer who is the subject of a $1.3 billion defamation lawsuit by voting-machine manufacturer Dominion Voting Systems over her claims that the company helped rig the election against Trump — assured the conference attendees that the U.S. Constitution is no match for their righteous cause.

Michael Flynn, the retired U.S. Army lieutenant general and former national security adviser who was forced to resign from the Trump administration after lying to Vice President Mike Pence about his interactions with the Russian ambassador to the U.S., Sergey Kislyak, floated another possibility.

Asked in Dallas why a Myanmar-style coup "can't happen here," Flynn seemed to signal his approval of that idea.

"No reason. I mean, it should happen here. No reason. That's right," Flynn responded, causing the audience to erupt in more applause.

In a post later in the day on Parler, Flynn claimed the media had misrepresented the meaning of his comments.

"For all the fake news 'journalists': Let me be VERY CLEAR — There is NO reason whatsoever for any coup in America, and I do not and have not at any time called for any action of that sort," Flynn said in his post. "Any reporting of any other belief by me is a boldface fabrication based on twisted reporting at a lively panel at a conference of Patriotic Americans who love this country, just as I do. I am no stranger to media manipulating my words and therefore let me repeat my response to a question asked at the conference: There is no reason it (a coup) should happen here (in America)."

Despite Flynn's clarification, not everyone was convinced that the retired general was not, in fact, advocating for Trump to be returned to office via a military coup.

While partisan conspiracy theories are not uncommon in American history (polls showed that more than half of Democrats believed President George W. Bush knew about the 9/11 attacks ahead of time and did nothing to stop them), they are especially prevalent among QAnon adherents. The followers of Q, a self-proclaimed high-ranking military officer, believe that the federal government is controlled by a group of Satan-worshipping pedophiles. Among the many QAnon predictions that have failed to come to pass, Trump was said to have planned the mass arrest of several high-profile child abusers on Jan. 20. And despite the fact that Biden was sworn in to office that same day, QAnon adherents clung to the widely circulated belief that Trump would be inaugurated for a second term on March 4.

This would all be easier to dismiss were it not for the fact that a significant portion of Americans actually believe it. According to a poll released last week by PRRI, 23 percent of Republicans and 15 percent of Americans overall think "the government, media, and financial worlds in the U.S. are controlled by a group of Satan-worshipping pedophiles who run a global child sex trafficking operation." Twenty-eight percent of Republicans and 20 percent of Americans overall are also convinced that "there is a storm coming soon that will sweep away the elites in power and restore the rightful leaders."