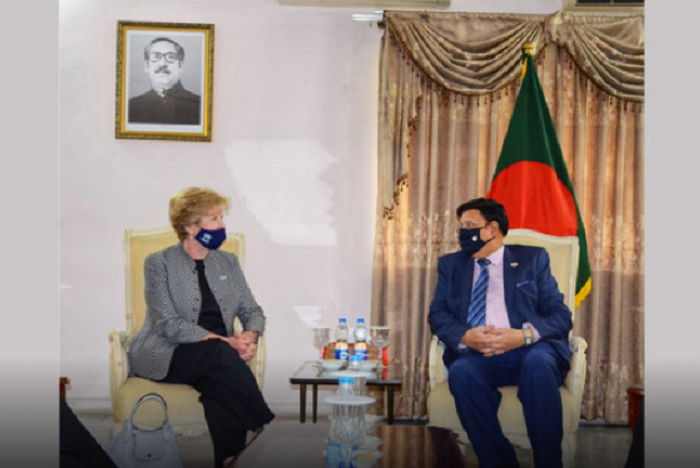 UNHCR high officials acknowledged that facilities in Bhasan Char for the Rohingyas are much better than that in Cox’s Bazar camps while they pledged to work on their mandate of assisting refugees wherever they are located in Bangladesh.

A two-member team from the UNHCR Headquarters in Geneva, comprising Mazou and the Assistant High Commissioner for Operations Gillian Teiggs talked to media after holding a meeting with foreign minister Dr AK Abdul Momen at State Guest Houise Padma in the capital.

“What the government and the international community needs is to ensure that they (Rohingyas) live with dignity (in Bhashan Char),” Mazou said while sharing their Monday’s experience of visiting the island where Bangladesh built a township for relocating 100,000 displaced Rohingyas from Cox’s Bazar camps.

Admitting that Bangladesh government has made important investment in Bhashan Char, he underscored the need for ensuring economic activities for Rohingyas in the island.

“It is clear that when you live in an island like Bhashan Char, you feel isolated. Therefore, you must first have economic activity,” he said.

He said Bhashan Char is an opportunity that should be used best before Rohingyas return to Myanmar.

“We must make sure that they have education, healthcare and livelihood…to make sure they are not idle,” he added.

Mazou said discussions are taking place between the Bangladesh government and the UNHCR on when the UN bodies are going to begin operations in Bhashan Char.

Since December last year, some 20,000 Rohingyas from Cox’s Bazar were relocated but the UN is yet to engage in Bhashan Char.

Gillian Triggs said the UNHCR is mandated to work with the government to help the refugees wherever they are.

“We must work on our mandate … and our mandate is helping refugees and displaced people,” she said.

About third country resettlement, she said it can be done for vulnerable people and for a very small group.

“But it (third country resettlement) is not a long-term solution,” she said, adding that repatriation of Rohingyas to their own land in Myanmar is the ultimate solution.

Triggs highly lauded Prime Minister Sheikh Hasina for hosting such large number of displaced people in Bangladesh that turned it into the largest refugee camp in the world. “We fully support the Prime Minister’s (Sheikh Hasina) policy,” she said.

During their tour to Bhashan Char, a large number of Rohingyas gathered together and launched a demonstration in demand of livelihood, money and repatriation or third country resettlement.

The crowd had free and frank interactions with the UNHCR AHCs and vented out their frustration and concerns over uncertainty vis-a-vis repatriation while they confirmed their relocation to Bhashan Char was completely on a voluntary basis.

Foreign Minister Momen said Rohingyas had expressed desperation to get out of the present situation in absence of any progress in repatriation.

Bangladesh Navy has implemented the Ashryan-3 at Bhashan Char, an island 37 miles off the mainland under the administrative jurisdiction of Hatiya, at the cost of Taka 3100 crore for accommodating 100,000 Rohingyas.

A total of 120 brick-built cluster villages and 120 cyclone shelters, facilities for education, hospital, farming and fishing, playground and presence of law enforcers make the island a much better living place for the Rohingyas than that of Cox’s Bazar camps.

The move was taken after some 750,000 Rohingyas fled a military crackdown in Myanmar’s Rakhine State in 2017 and took shelter in Teknaf and Ukhia.