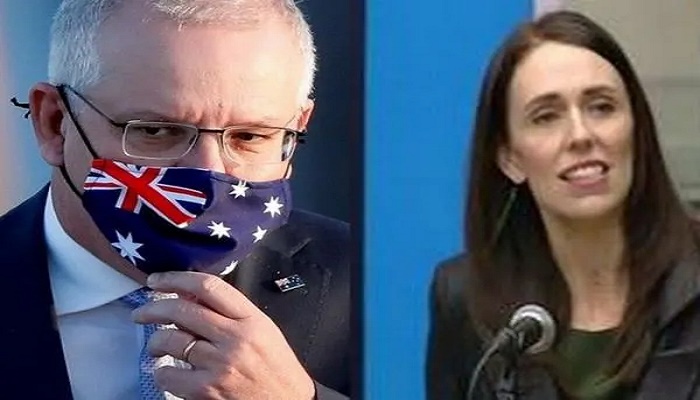 Australia and New Zealand expressed "deep concern over developments that limit the rights and freedoms of the people of Hong Kong" and also criticised China's treatment of the Uyghur minority in Xinjiang.

In a joint declaration, the two leaders called on Beijing to respect their human rights and grant the United Nations and other independent observers unfettered access to Xinjiang.

On the World Health Organization's inquiry into the origins of the pandemic, both leaders told reporters they hoped the global health body's investigation would continue.

"It's got nothing to do with global politics," Morrison said. "This has nothing to do with anything other than ensuring that the global pandemic, which has caused such havoc around the world, stealing lives and livelihoods, that we understand how this occurred so we can do everything we possibly can to ensure that it does not happen again."

On Indo-Pacific, both Australia and New Zealand wanted a free and peaceful Indo-Pacific region and would work to ensure that goal was not threatened by rising tensions between the United States and China.

Since then, the pro-China Hong Kong administration has launched a crackdown against pro-democracy lawmakers, activists and businessmen.

More than 10,200 people have been arrested in connection with the anti-government protests, the Hong Kong Department of Justice said in April.

Of those, more than 2,500 have been prosecuted and more than 600 convicted on charges including unlawful assembly, arson, rioting, possession of offensive weapons, assaulting a police officer and desecrating the Chinese national flag.

Separately, more than 100 people have been arrested under the security law or by the local police unit that was set up last summer to enforce it. Of those, 57 have been charged, John Lee, the security secretary, said last week.

Hong Kong, which is a former British colony, came under Chinese control in 1997. Beijing has guaranteed Hong Kong a "high degree of autonomy" under the principle of "one country, two systems" while highlighting the concept of "Hong Kong people administering Hong Kong."

However, following the 2019 anti-government protests against China, the central government under President Xi Jinping imposed the National security law.Hong Kong's legislature approved a sweeping electoral overhaul ordered by China to ensure that only Beijing loyalists rule the city and China's parliament in March passed a resolution on altering the electoral system in the territory.

Meanwhile, in Xinjiang, China has been accused of committing genocide against Uyghur Muslims and other religious minorities.

China has been rebuked globally for cracking down on Uyghur Muslims by sending them to mass detention camps, interfering in their religious activities, and sending members of the community to undergo some form of forcible re-education or indoctrination.

Earlier, a virtual hearing called by Britain, Germany and the United States and backed by 15 other mostly Western UN member states, demanded that China grant "immediate, meaningful and unfettered access" to Xinjiang.

The UN human rights chief Michelle Bachelet has been in talks about a visit to Xinjiang, but no human rights commissioner has visited the country since September 2005, according to South China Morning Post.