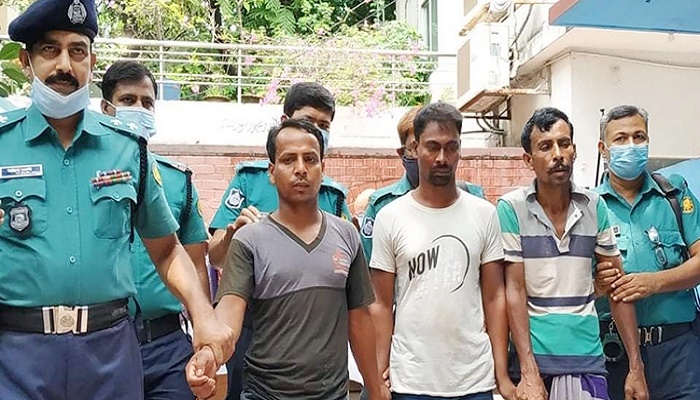 Police arrested three alleged human traffickers from Satkhira border over the alleged rape and torture of a Bangladeshi woman by her fellow Bangladeshis in India.

The arrestees are identified as Mehedi Hasan Babu, Mohiuddin and Abdul Quader.

The victim girl, who was trafficked to India, has escaped from three months of torture and captivity and filed a case with Hatirjheel Police Station on Tuesday night after returning to the country, Dhaka Metropolitan Police of Tejgaon division sources said.

One of the arrestees named Mehedi admitted that he has been involved with the human trafficking gang for nearly eight years during primary interrogation.

The media briefing will be held at office of the Deputy Commissioner of Police later in the day.

Earlier on Tuesday, the Rapid Action Battalion (RAB) arrested the mastermind of a human trafficking racket and his three associates, including a woman, from Jhenaidah.

Police in India’s Bengaluru arrested five Bangladeshis — four men and a woman — for allegedly raping and torturing a woman believed to be from Bangladesh.

Rifadul Islam alias TikTok Hridoy of Moghbazar area in Dhaka and and several others were accused in the case filed on May 28, this year.