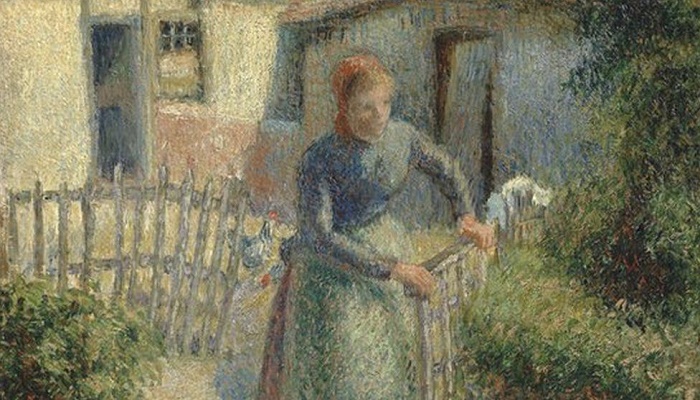 A French woman has ended her legal battle to retrieve a painting stolen from her adoptive parents by the Nazis.

Léone-Noëlle Meyer discovered the artwork was in an Oklahoma gallery in 2012, but the statute of limitations meant she was unable to reclaim it.

On Tuesday, however, she announced she was ending her battle to overturn an agreement to rotate the Pissarro painting between France and the US.

Mrs Meyer, who is in her 80s, said she had been "heard but not listened to".

"After all these years, I have no other choice but to take heed of the inescapable conclusion that it will be impossible to persuade the different parties to whose attention I have brought this matter," she wrote in a statement.

The University of Oklahoma, where the painting had been found, had threatened to sue her if she did not end her legal action. A US court said she had violated a settlement agreement she had herself helped negotiate.

Ms Meyer will now renounce all rights to the painting, while the university will ensure the painting is rotated between France and the US every three years, as per the original agreement. The painting will also be accompanied by a plaque outlining Mrs Meyer's family history.

The dispute centred around a painting of a shepherdess by Impressionist artist Camille Pissarro. Mrs Meyer, whose biological family was killed during the Holocaust, inherited the painting from her adoptive parents, Yvonne and Raoul Meyer.

La Bergère Rentrant des Moutons (Shepherdess Bringing in Sheep) was among a number of artworks stolen by Nazi officers in the south-west of France in 1941, before it disappeared for years.

An American family, who had bought the painting in good faith, gifted it to the University of Oklahoma's Fred Jones Jr Museum in 2000.

By the time Ms Meyer discovered its new location over a decade later, the two-year statute of limitations had passed and so she reached an agreement that she would share possession of the painting with the university and that it would rotate between the US and France.

Under the 2016 deal, ownership of the painting would return to the University of Oklahoma if Ms Meyer was unable to find a French gallery willing to take custody of it after her death.

Ms Meyer's lawyer argued she had been forced to sign the agreement, while the expensive conditions surrounding the painting's transportation between the two countries meant French art galleries refused to take the painting permanently.

Last month, she lost a court case to prevent the painting - which is currently on display in the Musée d'Orsay - from leaving France in July.