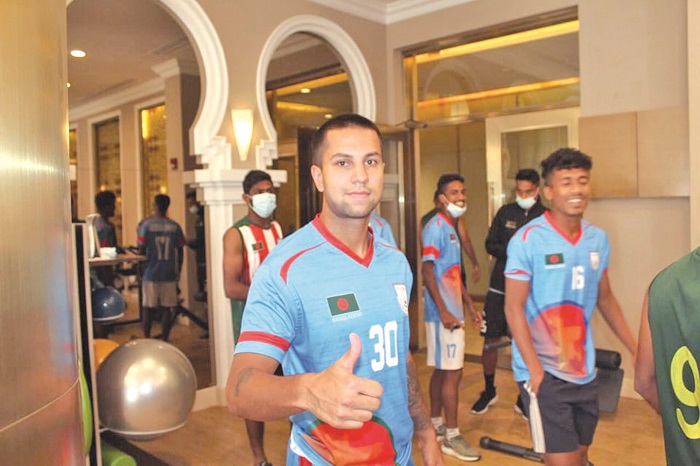 Finnish-born Bangladeshi right-back Tariq Kazi is optimistic about his debut for the national team in the first match of FIFA, AFC joint qualifiers against Afghanistan on Thursday.

“It’s exciting to be part of the Bangladesh team for the first time. Hopefully, I will get my chance and I will give my best,” said the 20-year-old right-back on Tuesday.

“We are practicing very well; the team are giving everything on the pitch. And we have very exciting about the upcoming games against Afghanistan, Oman and India. As a team we will give the best effort in the game,” he added.

The young Bangladeshi, who has been playing for the top club Bashundhara Kings, got his maiden call from the national side last November in two friendlies against Nepal. But he was ruled out and left the camp due to an injury during the training session.

Tariq was recalled for the camp of the preliminary squad due to his performance in the ongoing premier league, later he was selected for the 35-member final squad along with eight other Kings’ players.

He also got the chance to play in the one-off practice match of Bangladesh against Sheikh Jamal DC Ltd in Dhaka on May 27. He was part of the playing eleven and played until halftime.

A source claimed head coach Jamie Day is likely to play the same playing eleven in the first match against Afghanistan.

Midfielder Md Ibrahim joined the national team on Monday and started practicing after testing negative for Covid-19 on Tuesday, may also get the chance to play against Afghanistan.

Ibrahim said that he is mentally and physically fit and started to work hard with the team to secure a victory in the first match.

“I extend my thanks to the federation and my club for supporting me. I am mentally and physically fit. Today, I started practicing and worked hard with the team to earn a victory in the first match,” he ended.