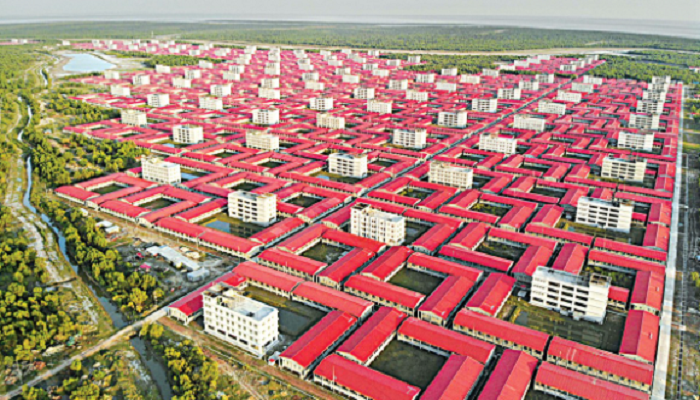 The government of Bangladesh has said a section of international media and Civil Society Organizations (CSOs) have been continuously campaigning against Bhasan Char and Rohingya relocation with distorted information.

Noting this with "great disappointment" the Ministry of Foreign Affairs on Tuesday said such campaign will undermine the magnanimous humanitarian gestures and the sincere efforts of Bangladesh.

"Excessive focus on temporary arrangement and undue criticism will only shift the focus from the permanent solution, which lies in repatriation to and reintegration of Rohingyas in Myanmar," said the MoFA in a media release.

During UNHCR senior officials tour to Bhasan Char, a large number of Rohingya gathered  and launched a demonstration.

At one point, the crowd got agitated and in the process, some of the Rohingyas reportedly got minor injury, said the Ministry adding that once the delegation left the island, the situation normalized.

As a part of their protection-mandate, the team, accompanied by senior officials from the Ministry of Foreign Affairs, visited Bhasan Char on Monday.

The crowd had "free and frank interactions" with the AHCs and vented out their frustration and concerns over uncertainty vis-a-vis repatriation.

In absence of any progress in repatriation, they expressed desperation to get out of the present situation and requested to consider relocation to a third country, said the Ministry.

They also confirmed to the AHCs that their relocation to Bhasan char was completely on a voluntary basis.

In recent times there have been a number of important visits to Bhashan Char including the visits of the OIC Assistant Secretary General, the 18-member UN team and most recently a group of Ambassadors.

During all these visits, the Rohingyas spontaneously and happily interacted with the visiting guests both in informal and formal settings.

The MoFA said Rohingyas are Myanmar nationals and any arrangement for them in Bangladesh; be it in Cox’s Bazar or in Bhasan Char; is purely on a temporary basis until they return to their country.

The Rohingyas also want to return to their homeland and all including the UNHCR need to work constructively to that end, said the Ministry.

The UN is expected to assume their responsibility and operate within their mandate taking into account the ground reality and concerns of the host community, Bangladesh says.

The Government of Bangladesh, on its part, is ready to address any realistic needs and concerns of the Rohingyas, said the Foreign Ministry.