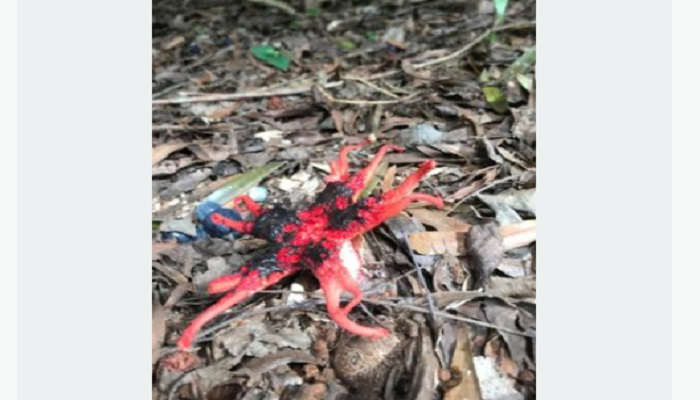 A hiker who stumbled across a brightly-coloured anomaly during a walk in the woods turned to the internet for help to identify what it could be.

An image was shared on Reddit, showing a red and black entity with tentacle-like protrusions appearing to have spawned from the ground, which was spotted at Mount Nebo, close to Brisbane, Australia.

It was posted by user Aus556762 with the caption: "WTF is this? Smells like rotting flesh. Mt Nebo", while saying the smell - which they also compared to 'death' - was pungent from a metre away.

They added that it was also attracting flies, and people said it reminded them of something from Resident Evil or Stranger Things.
But one viewer was able to quickly identify it as aseroe rubra, a fungi more commonly known as a 'stinkhorn' in a nod to its foul smell.

It's said to 'bear its spores in a brownish slime which smells of faeces' to attract flies for pollination.

Many people agreed with the assessment, and another asked: "I have a couple of these f***ers in my yard, my question is can you burn them with fire or how else can you eradicate them? Standard weed killer? They smell like corpse. Not that I know what corpses smell like, just saying."

One advised: "They are easy enough to pull out and dump in the rubbish bin. No need for chemicals."