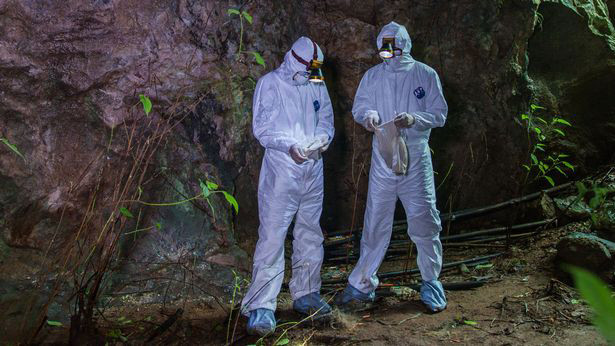 Mystery surrounds a bat infested cave in China where a Covid-like virus may have killed three miners in 2012 before the sample was sent to the Wuhan lab at the centre of the leak allegations.

Guarded by Chinese police and sealed off from the outside world, this former copper mine in Mojiang some 1118 miles away from Wuhan could be a smoking gun on the origin of the pandemic.

The Wuhan Institute of Virology (WIV) - a high security bio lab specalising in coronaviruses - is in the eye of the storm as questions rage whether Covid could have originally emerged from escaped from its campus.

China and the lab furiously deny any allegations, but a new study has suggested the virus appears to have been manipulated and US President Joe Biden has ordered his spies to "redouble" their investigations.

However, the story of Covid may go back the best part of a decade - potentially to a copper mine in the mountainous and forested region of Yunnan in April 2012.

A team of miners were given the job of cleaning out the abandoned shaft which was infested with roosting horseshoe bats.

The men found themselves shoveling knee-deep piles of guano - a repulsive combination of bat faeces and urine.

And within weeks, three of the men were dead.

The miners succumbed to a mystery infection which made them develop pneumonia-like symptoms, hacking coughs and high temperatures - chillingly similar symptoms to what we now know as Covid.

The fatal infection mostly flew under the radar beyond a smattering of reports in the West, such as an article in 2014 in Science which asked "New Killer Virus in China?".

The deaths didn't really get much attention beyond that, until suddenly Covid emerged as a once-in-a-century global pandemic that has so far killed 3.5million people.

Questions begun to be asked about where the new coronavirus came from as China reported the first cases in Wuhan to the World Health Organisation in December 2019.

And eyes quickly turned to the biosecurity level 4 lab, WIV.

It turns out virus samples from bats roosting in the cave were sent to WIV, and one of the nine viruses identified was a 96.2 per cent march for SARS-CoV2.

The virus - recovered from the anus of a horseshoe bat - is around ten mutations away from Covid, and is by far its closest known relative.

While nothing is proven as the politically mired investigation trudges on, it raises questions between the link between the Mojiang miners and Covid.

The Sunday Times reported researchers in China have been unable to dig out any media reports on the miners deaths - suggesting a media blackout or a cover up.

But one piece of key evidence exists, a thesis by a young medic Li Xu.

Li wrote a paper on the infections, and while he was unable to say exactly what killed them, he argued it was most likely a coronavirus from a bat.

"This makes the research of the bats in the mine where the six miners worked and later suffered from severe pneumonia caused by unknown virus a significant research topic," he said.

And it is exactly this type of research which was undertaken when the samples were sent to WIV.

The virus that may have killed the miners is just one of 100 believed to be stored in the lab, but with key databases are still missing the world does not know for sure what else they were up to.

WIV is known to have been carrying out gain-of-function research - experiments designed to soup up viruses to make them more infectious - alongside the US-funded EcoHealth Alliance.

The theory goes: could the virus that killed the men in Mojiang have been manipulated and transformed into what we know as Covid, before being accidentally allowed to escape in a lab accident?

The world does not know for sure.

But scrutiny is ratcheting up on China, with questions over lab safety at the facility as researchers previously admitted being bitten and sprayed with bat blood.

Despite being condemned as a "conspiracy theory" for the last year, the possibility that the pandemic was caused by a lab leak has become increasingly mainstream in recent weeks.

And the answers may be hard to come from at the Mojiang mine, with reporters who visited the site being tailed by Chinese government agents and being turned away by police.

Associated Press reporters who visited the site in November 2020 were met with roadblocks as the mine has become a black hole of information.

BBC News also saw their journalists stopped by police as they were told to turn back as they approached Yunnan.

It emerged this week that Boris Johnson was briefed on a possible lab leak origin for Covid as early as April 2020.

The extraordinary revelation shows how seriously the West is taking the possibility, despite the narrative being firmly dismissed in the early days of the pandemic by scientists and politicians.

China has long been accused of covering up or distorting its role in the early days of the pandemic, with claims the Communist Party manipulated case and death figures while withholding information from WHO.

But circumstantial evidence is mounting, and even WHO have ordered a fresh probe after a its first effort was derided and accused of being a "whitewash".

Beijing hit back as US President Biden this week as it accused him of playing politics by indulging the idea of a lab leak.

His predecessor Donald Trump repeatedly suggested in the final months of his term that the virus came from WIV - and insisted the US had concrete evidence.

And his former medical adviser Dr Anthony Fauci made his own admission that he is now no longer convinced the Covid originated naturally and called for a full investigation.

It emerged this week Wuhan lab staff became sick and needed hospital care weeks before China admitted it was facing an outbreak.

A National Security Council spokeswoman said the Biden administration continued to have "serious questions about the earliest days of the pandemic, including its origins within the People's Republic of China".

Meanwhile, it emerged that China had probed weaponising coronaviruses some five years before the outbreak.

There is currently no evidence to suggest the virus was intentionally released by China.