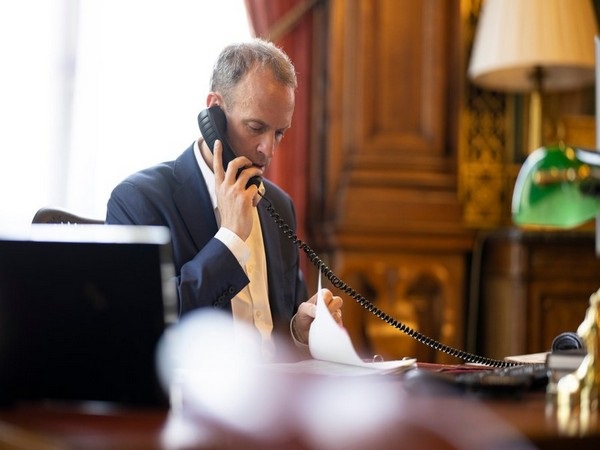 UK Foreign Secretary Dominic Raab, during his telephonic conversation with Chinese counterpart Wang Yi, underlined Britain's deep concern at the situation in Hong Kong and the need for the United Nations to have "unfettered access" to Xinjiang.

"Today I spoke to China's Foreign Minister Wang Yi on the importance of working together on global challenges such as climate change and health. I underlined the UK's deep concern at the situation in Hong Kong and the need for the UN to have unfettered access to Xinjiang," tweeted Raab on Thursday.

According to the Chinese foreign ministry, Wang elaborated on China's position on issues related to Hong Kong and Xinjiang, stressing that the "one country, two systems" policy is China's basic state policy, which China will unswervingly and consistently adhere to.

He also pointed out that Xinjiang-related issues are about countering violent terrorism, separatism and radicalization, adding that the Chinese side welcomes foreign visitors to Xinjiang to learn about the real situation, but does not accept "investigation" based on a presumption of guilt.

Since then, the pro-China Hong Kong administration has launched a crackdown against pro-democracy lawmakers, activists and businessman.

Hong Kong, which is a former British colony, came under Chinese control in 1997. Beijing has guaranteed Hong Kong a "high degree of autonomy" under the principle of "one country, two systems" while highlighting the concept of "Hong Kong people administering Hong Kong."

However, following the 2019 anti-government protests against China, the central government under President Xi Jinping imposed the National security law.

Hong Kong's legislature approved a sweeping electoral overhaul ordered by China to ensure that only Beijing loyalists rule the city and China's parliament in March passed a resolution on altering the electoral system in the territory.

Meanwhile, in Xinjiang, China has been accused of committing genocide against Uyghur Muslims and other religious minorities.

Earlier, a virtual hearing called by Britain, Germany and the United States and backed by 15 other mostly Western UN member states, demanded that China grant "immediate, meaningful and unfettered access" to Xinjiang.

The UN human rights chief Michelle Bachelet has been in talks about a visit to Xinjiang, but no human rights commissioner has visited the country since September 2005, according to South China Morning Post.