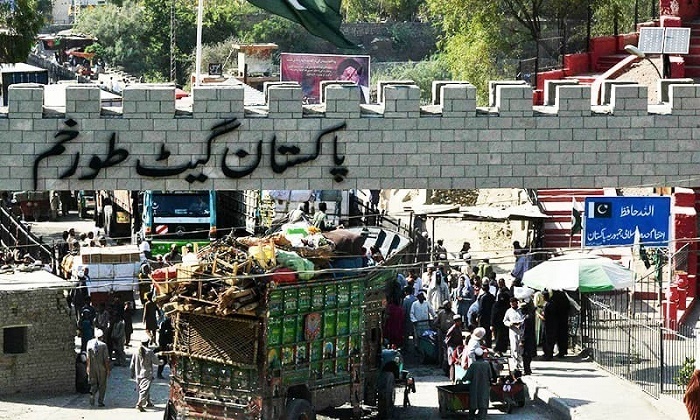 Trade with Afghanistan through Torkham remained suspended on the third consecutive day on Thursday as Khugakhel tribesmen continued their protest and blockade of the main road leading to the border crossing.

Afghan nationals aspiring to return to their country were, however, provided with an alternative route via Charbagh area to reach Torkham as part of a good-well gesture by the protesters as the travellers also included women, children and elderly people.

Mufti Ejaz and Mirajuddin Khan, the elders of Khugakhel, told journalists at the protest site that their protest would continue till signing of a mutually agreed accord regarding fulfilment of their four major demands with concrete guarantees from the regional security officials.

The Khugakhel tribesmen, being the collective owners of the land leased out for the construction of modern customs terminal at Torkham, had long been pushing for payment of the price of the additional land the National Logistic Cell (NLC) had off late acquired for the terminal, share in the monthly profit from the terminal and adequate share in jobs for the youth of the tribe.

Both Mufti Ejaz and Mirajuddin said that Federal Board of Revenue, with whom they had earlier signed an agreement regarding lease of their land in 2016, and NLC had committed to sign a new agreement regarding acceptance of their demands in February but later they backtracked on their promise and they were compelled to resort to protest.

Meanwhile, scores of representatives of various political parties and local tribal and religious leaders visited the site of the protest near Landi Kotal bazaar and extended support to the protesting Khugakhel tribesmen and called upon the officials concerned to help resolve the issue.

No negotiations between the Khugakhel elders and government officials were held on Thursday while the day also remained peaceful as police avoided taking any action against the protesters.