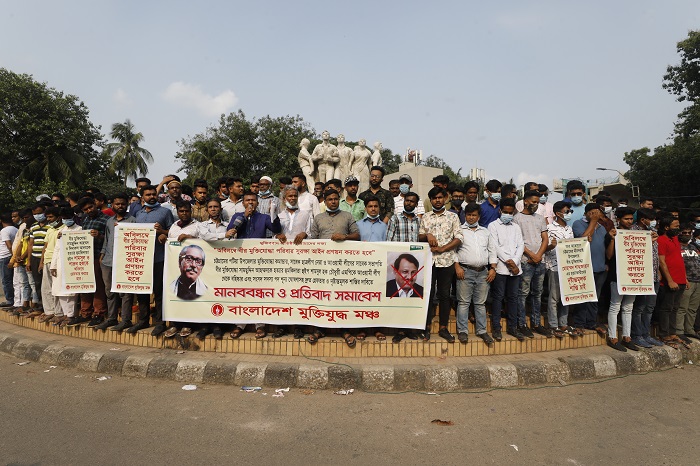 Muktijuddho Mancha vowed to wage tougher movement across the country if whip and his son are not arrested within 48 hours.

Hailing from various parts of the country, hundreds of leaders and activists of the organisation and children of freedom fighters flocked to pavement of Raju Sculpture at the TSC in Dhaka University and formed a human chain on Saturday to press home their demands.

Aminul Islam Bulbul, president of the central committee of Bangladesh Muktijuddho Mancha, presided over the programme which was  moderated by its general secretary Md Al Mamun.

It expressed deep concern over killing of freedom fighter Md Shahjahan at Osmanpur in Mirsharai upazila of Chattogram and demanded arrest of the culprits involved in the incident.

Shahjahan, son Goni Ahmed, was beaten to death over a land feud on Friday.

Speaking at the human chain, Aminul Islam Bulbul, president of Muktijuddho Mancha, said people like whip Shamsul and his son Nazmul Haque Chowdhury Sharun are tarnishing image of the Awami League government which is lauded for achieving the country’s unprecedented socioeconomic success.

“We have formed human chain demanding arrest of Shamsul Haque and his son Nazmul Haque Chowdhury Sharun. If they are not arrested and his seat not declared vacant, we will go for tougher action across the country,” he said.

Justifying demand, he said persecution of freedom fighters will continue if whip Shamsul Haque and his son Nazmul Haque Chowdhury Sharun are not behind the bar.

About Sharun, Aminul Islam said “We saw a video showing Sharun firing AK 47. Although the video went viral on social media, law enforcing agencies were indifferent towards the incident.”

Shamsul Haque Chowdhury, his son Nazmul Haque Chowdhury Sharun and their associates have created a reign of terror in Patiya, a hotspot of killing and persecution of freedom fighters and other innocent people, he opined.

About controversial political background of Shamsul Haque, he said the whip was first affiliated with Juba Dal, a front organisation of BNP. Later, he joined Jatiya Party. Finally, he intruded into Awami League for bread and butter.

Aminul Islam said freedom fighter Samsuddin Ahmed has invited enmity of whip and his son for protesting their corruption and misdeeds.

“By threatening a freedom fighter, whip and son have proved that they are not imbued with the spirit of the liberation war,” he said.

Sculptor Rasha said Muktijuddho Mancha is demanding arrest of whip Shamsul Haque Chowdhury and his son Sharun within 48 hours for their misdeeds and threat to a freedom fighter.

Lawmaker Shamsul Haque Chowdhury and his son Sharun are continuously indulging in persecution of senior Awami League leaders and activists for raising voice against their misrule, he added.

Terming Samsuddin Ahmed a seasoned Awami Leaguer, he said the freedom fighter had joined Awami League in 1962 and faced hostile situation during the regimes of Ziaur Rahman and HM Ershad.

In irony of the fate, the freedom fighter is still facing torture and threat by whip and his family members at a time when Awami League is in power, he said.

Whip Shamsul Haque tried to make the government’s anti-casino drive controversial and he has lost all eligibility to continue as lawmaker, he opined.

Although Sharun threatened freedom fighter and Awami League senior leader Didarul Alam for protesting his casino business, he is yet to be arrested, Mamun alleged.

He said the law enforcers did not take any step against Sharun for firing AK 27 of which video went viral on the social media.

Recently, Morshed Chowdhury, a banker in Chattogram, committed suicide due to persecution by Sharun. Banker’s wife Ishrat Jahan and their daughter Mubasshira Jahan blamed Sharun for instigating the suicide. A case against Sharun pending with the police sees no light for lack of action.

Patiya lawmaker Shamsul Haque and his family members have become millionaire by making an inroad into Awami League, he added.

The whip and his son are threatening Samsuddin Ahmed who was president of Chattogram south Chhatra League in 1972 and general secretary of Patiya Awami League after 1975. Later, he was elected president of upazila Awami League and he continued with the post till 2010. He was commander of upazila freedom fighters’ council till 2013.