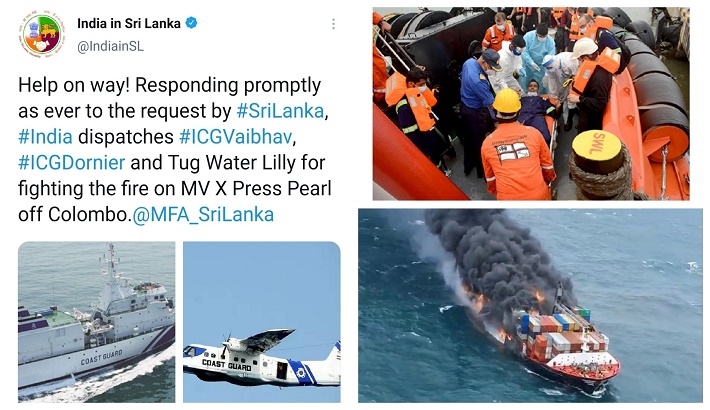 India promptly responded to an emergency request by Sri Lanka Navy and deployed multiple assets to douse the fire on MV X Press Pearl off Colombo on 25 May 2021. This includes Vessels Vaibhav, Vajra and Samudra Prehari by Indian Coast Guard and Tug Water Lilly by Director General, Shipping in addition to Dornier aircraft for aerial reconnaissance.

2. Assistance of Government of India for firefighting as well as pollution control was sought by Sri Lanka Navy at 1200 hrs on 25 May 2021. This came in the wake of an onboard explosion on 25 May 2021 on the Singapore-flagged MV X Press Pearl. Immediately upon receiving the request, relevant authorities in India were alerted and assets were deployed expeditiously. While the Dornier aircraft reached Colombo at around 1600 hrs on 25 May 2021,the first Vessel would reach around 1900 hrs .

3. India has the tradition of being the first responder during crises in Sri Lanka. It may be recalled that a potentially huge oil spill was averted with assistance from India after MT New Diamond with 200,000 metric tons crude oil on board caught fire off Sri Lanka’s Eastern Coast in September 2020. Three Indian Naval Ships rushed with assistance following the floods in Sri Lanka in May 2017.

The fire that broke out in the forecastle area of the MV X-PRESS PEARL, a container ship anchored 9.5 nautical miles northwest of the Port of Colombo, is now spreading to the quarterdeck where the bridge is stationed. The fire was exacerbated by strong winds due to changing weather conditions. However, the crew of the ship and members of the emergency response team of the Salvor have been safely brought ashore as of now.

Against this backdrop, an Indian Coast Guard Maritime Pollution Preventive Ship with firefighting capabilities is scheduled to arrive to the scene of action by nightfall‍, at the request of Commander of the Navy, Vice Admiral Nishantha Ulugetenne. In addition, a Dornier aircraft carrying fire extinguishing agents and oil- dispersants is also made ready to respond in the event of an emergency. Meanwhile, Commander of the Navy making a visit to the Operations Room of the Western Naval Command reviewed the developments with Commander Western Naval Area and Director General Operations and gave necessary instruction for onward action to be initiated.

Also, due to the rough seas caused by the prevailing bad weather, the ship is now tilted slightly to the right. As a result, some of the containers onboard have tumbled into the sea and some of which are believed to have sunk in waters. As such, the Navy cautions the fishing community engaging in fishing in the area to avoid this particular sea area.