What next for Syria's Assad as new mandate begins? 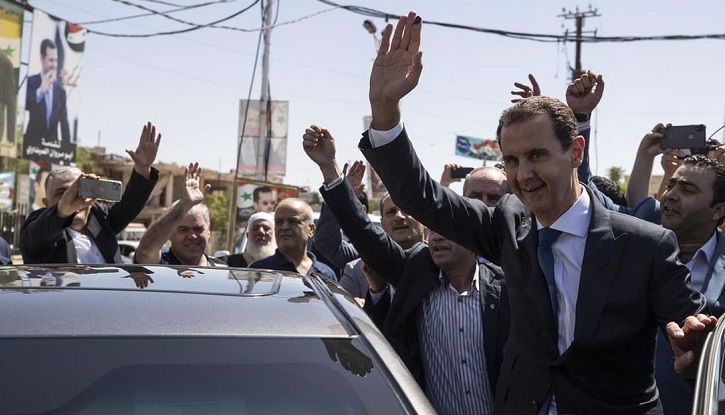 Syria's President Bashar al-Assad has won a fourth term in office with 95 percent of the vote in a ballot dismissed abroad as a "farce".

With the conflict mostly on hold but his country's economy in ruins, what are Assad's priorities likely to be when he kicks off his first post-war mandate?

That's the percentage of the vote official results say Assad won in Wednesday's presidential election, every parameter of which was controlled by him and his Baath party.

The number of votes -- 13.5 million -- he received far exceeded what some observers had said would be a realistic total turnout, and thousands of people had gathered in public squares on Thursday, hours before the results were announced.

"95.1 percent of Syrians have spoken: Bashar al-Assad is president of the republic," was the headline on the front page of the pro-government Al-Watan daily Friday.

With less than five percent of the vote left for his two hand-picked "rivals", the election result Assad's regime announced appears to shut down any suggestion he might have used the election as an opening for more inclusive politics.

"The international diplomatic effort to reform Syria is dead, and this election with its authoritarian 95.1% of the vote for Assad is the last nail in its coffin," said Nicholas Heras, an analyst with the Newlines Institute in Washington.

The United Nations had pinned hopes on this election as a watershed in efforts to reform Syria but the much-awaited constitutional overhaul that was supposed to precede it never happened.

Much of the international community dismissed the ballot before it even started, with the notable exception of Russia, which welcomed Assad's "decisive" victory.

For Heras, Moscow and Damascus' other key ally Tehran sent "a big signal to the United States and its partners that there is no Syrian future without Assad."

- What priorities for Assad? -

Immediately after results were announced late Thursday, Assad said "the work phase" for the reconstruction of Syria would begin.

His regime only controls about two thirds of the national territory and some areas are in ruins, mostly as a result of his own forces' bombardments.

Assad's campaign cast him as "the man who won a war, has big ideas for Syria's reconstruction, and who is the only person who can manage" the post-conflict chaos, Heras said.

But with the West unwilling to release reconstruction aid in the absence of political reform, Damascus is turning to its erstwhile foes from the Gulf for money.

Some monarchies have already reopened diplomatic representations in Damascus and Assad hopes to further upgrade relations to launch his new seven-year mandate.

Senior Assad adviser Buthaina Shaaban told a local radio station that "efforts were under way to improve ties between Damascus and Riyadh."

Foreign Minister Faisal al-Meqdad has also spoken of a thaw in relations with the region.

Syrian analyst Shadi Ahmad sees Assad's first months after the election being marked by the "reestablishment of relations between both sides".

The rapprochement would come a decade after the start a war in which Assad once claimed he was facing rebels armed and funded by Gulf powers.

Assad's "me or chaos" mantra from those early stages of the conflict has further simplified to "me or nothing" now that fighting has largely wound up.

Of the two other contenders in the May 26 vote, both were widely seen as paper candidates from the token opposition.

Assad's most virulent opposition is in exile, hosted by countries that are unwilling or unable to take decisive steps towards change in Syria.

Western powers like the United States or France that once insisted on Assad's departure have described the ballot as "neither free nor fair" and "a farce".

"Beside this description they have very little leverage," said Karim Emile Bitar, a Middle East analyst and professor at Saint-Joseph University in Beirut.

In the long run, however, Bitar argues that Assad himself is likely to feel "hostage to his regional patrons particularly Iran and Russia".

"Sooner or later the game will change and the opposition will see the light at the end of the tunnel, and hopefully a new chapter in the history of Syria might open," he said.

"But to be honest at this stage I see very few reasons for optimism," Bitar said.