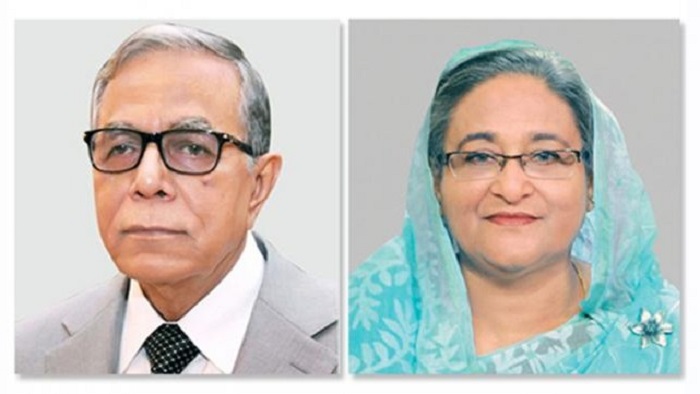 President M Abdul Hamid and Prime Minister Sheikh Hasina extended heartiest congratulations and felicitations to all the peacekeeping members marking the ‘International Day of United Nations Peacekeepers-2021’ to be observed tomorrow the country as elsewhere in the globe.

In separate messages, they recalled all the valiant members of UN peacekeepers who made supreme sacrifices for upholding world peace and paid deep homage to them.

In his message, President M Abdul Hamid said “I welcome the initiative of observing the ‘International Day of UN Peacekeepers- 2021’ in Bangladesh as elsewhere of the world”.

He added: “On this auspicious occasion, I would like to convey my heartiest congratulations and felicitations to all members of the UN peacekeepers including Bangladesh. I pay my deep homage to the valiant members of UN peacekeepers who made supreme sacrifices for upholding world peace”.

In pursuing the country’s diplomatic objectives, the government has been consistent in upholding the principle of ‘Friendship to all, malice towards none’ as enunciated by Father of the Nation Bangabandhu Sheikh Mujibur Rahman, the President said.

Bangladesh has emerged as a country of peace and communal harmony around the world, he said, adding the peacekeepers of Bangladesh have been able to attain credibility by dint of their highest standard of professionalism, devotion and bravery since their first engagement to UN peacekeeping operations in 1988.

“The outstanding contribution of our peacekeepers has upheld the image of Bangladesh at international arena,” Hamid said, adding Bangladesh is one of the largest troops contributing nations in UN peacekeeping missions.

“Utmost sincerity along with professionalism of our peacekeepers has been playing a vital role in achieving the glory. I hope Bangladeshi peacekeepers, performing their duties with honesty, devotion and professionalism, will be able to continue this trend in establishing world peace, harmony and amity in the days to come,” he added.

In her message, Prime Minister Sheikh Hasina said, “I am happy to know that the ‘International Day of United Nations Peacekeepers-2021’ is being observed in Bangladesh on 29 May as elsewhere in the world”.

“On this occasion, I proudly recall the impressive role of Bangladesh in the UN peacekeeping operations, and extend my heartiest congratulations and felicitations to all Bangladeshi peacekeeping members,” she added.

The premier recalled with profound respect those peacekeepers who have sacrificed their lives for the world peace and made the country’s flag brighter in the globe.

“I solemnly pray for the salvation of their departed souls and convey my wholehearted sympathy to their bereaved family members,” the Prime Minister said.

Sheikh Hasina said Bangladesh became the member of the United Nations on 17 September 1974.

On 25 September 1974, the Greatest Bangalee of all times, Father of the Nation Bangabandhu Sheikh Mujibur Rahman in his historic speech in Bangla at the UNGA expressed firm commitment of Bangladesh’s continued support to establishing peace all over the world, she said.

Since then Bangladesh has been maintaining good relations with all friendly and peace-loving countries in the world and taking part actively in all programmes under the UN in promoting and protecting global peace, she continued.

“Bangladesh today has become one of the largest troops contributing nations in the UN peacekeeping missions. The unique contribution of our peacekeepers in the UN missions and multinational forces has brightened the image of the nation and made Bangladesh a dignified country in the world,” the premier said.

At the same time, it played an important role in strengthening diplomatic ties with the powerful nations of the world, she said, adding, moreover, Bangladeshi peacekeepers have won the trust and confidence of the people through restoring peace in war-ravaged countries with their high standard of professionalism, efficiency and dedication.

The pride and dignity that Bangladesh has gained today as an actively participating country in promoting peace around the world is the outcome of outstanding professionalism, courage, bravery and skills or our peacekeepers, Sheikh Hasina said.

“On behalf of the government and the people of Bangladesh, I reiterate my full support to the UN for the protection and promotion of world peace,” she said, adding the government will continue its efforts to ensure that Bangladeshi peacekeepers can respond to the call of the UN with more confidence.

“I hope that the peacekeepers will establish Bangladesh as a powerful peace-building country in the world through their expertise, professionalism and dedication in the UN Peacekeeping operations and will further brighten the country’s image in the world,” the Prime Minister said.

The President and Prime Minister wished the ‘International Day of United Nations Peacekeepers-2020’ a grand success and well-being of all.