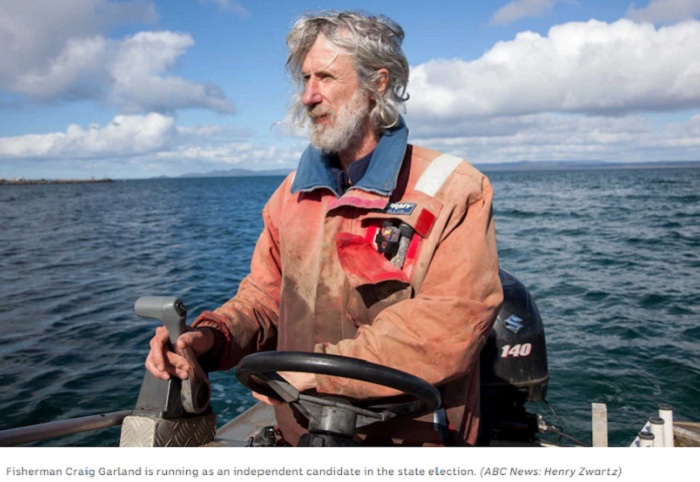 You could be forgiven for thinking that both the Liberal and Labor parties see independent candidate Craig Garland as their main opposition in the Braddon by-election.

It's unusual for major parties to spend much time discussing independent lower-house candidates for federal elections, because they rarely pose much of a threat.

But Liberal Party heavyweight Eric Abetz went so far as to hold a press conference on Thursday to highlight a 24-year-old assault conviction against Mr Garland, a fisherman from Montagu in the state's north-west.

Later, Primary Industries Minister Sarah Courtney made a statement condemning Mr Garland for the assault charge, which stemmed from an incident in which a woman suffered a broken wrist, saying "violence against women is never okay and can never be justified".

It's the strongest indication yet the Liberals are concerned that Mr Garland's preferences may ultimately get Labor's Justine Keay over the line next Saturday.

Also out on Thursday was Federal Labor MP Tony Burke, who hit the hustings with Ms Keay to announce $750,000 for scientific studies in Tasmania's oceans and a ban on all factory freezer trawlers in the small pelagic fishery if Labor won the next general election.

Labor hopes these announcements might entice voters away from Mr Garland, who has been campaigning for better protection of state fisheries.

Mr Garland performed better than expected in the March state election, receiving almost 2,000 primary votes, and by-election polling suggests he's likely to be the best of the rest after Keay and the Liberals' Brett Whitely.

Mr Garland is preferencing Labor ahead of the Liberals, and that seems to have the Liberals running scared.

During his press conference, Senator Abetz seized on revelations that Mr Garland pleaded guilty to an assault charge in 1994, saying it "put a big question mark" over Mr Garland's fitness to run for office.

"The people of Braddon have a stark choice to make, and Craig Garland clearly is not an option to vote for if you're not sure who to vote for," he said.

"Myself, as a lawyer, can I say you don't plead guilty to a charge unless you accept the circumstances of the statement of facts that were put to the court."

'I've got nothing to hide whatsoever'

Mr Garland said the charge related to an incident in Geelong, where he stepped in after his friends were attacked by a group of people and were being "bashed".

He said a woman was pulling on his dreadlocks during the scuffle before she fell and broke her wrist, and that he later found out an off-duty police officer was involved.

Mr Garland faced nine charges initially but said when he indicated he would fight them in court Victorian Police added more.

He said they ultimately dropped 14 charges as part of a deal in which he pleaded guilty to one.

"It had a detrimental effect on me," Mr Garland said.

"I was a fun-loving, free-going footballer that liked to socialise and have a laugh. After that I was looking over my shoulder.

"I've got nothing to hide whatsoever. If I was faced with the same situation again and had two young blokes being chased down the road being bashed, I'd do the same thing again."

'They're clutching at straws'

Senator Abetz was asked if he was focusing on the assault charge because the Liberals were worried about Mr Garland's preferences.

Mr Abetz said he was highlighting it because fitness for public office required a "certain degree of integrity".

But Mr Garland thinks the Liberals are concerned.

"They're clutching at straws. Obviously, they're worried about me," he said.

"They've got a minority view, they want to rule — they're an elitist, self-entitled pack of pricks."

Mr Abetz responded that Mr Garland's use of offensive language was another indication that he was not a fit and proper person for public office.

Labor candidate Justine Keay did not want to buy into the debate on Thursday, telling reporters she had no comment to make about Mr Garland's past.

The Braddon by-election is expected to be close, so do not expect the Liberals to dampen their criticisms of Mr Garland as we hurtle towards July 28.