The Arctic is not the South China Sea 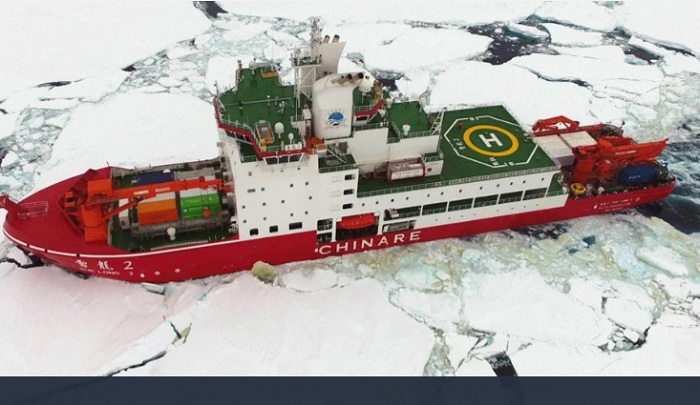 As climate change continues to affect the Arctic, and the region begins to be more widely seen as one of emerging economic importance, the perception of Arctic waters as a nascent arena for great power rivalry has gained much traction in recent years.

China is very much a factor in these debates, as the country has sought to further develop its own political, scientific and economic interests in the far north. While Beijing aspires to be accepted as an Arctic stakeholder and a participant in emerging regional dialogues, the decline of Sino-American relationsnow presents a significant challenge to these ambitions.

As China continues to seek an enhanced presence in the far north, it has become more commonplace within commentaries and studies of Chinese Arctic policies to paint the country’s interests there as assertive or revisionist.

Very often these critiques have sought to define, and at times conflate, China’s strategic capabilities in the Arctic by drawing a direct comparison with Beijing’s policies in the South China Sea, often without offering any connecting material to support that link.

Instead, “South China Sea” has become a sloppy shorthand of sorts for those attempting to demonstrate a China threat in the Arctic. This despite the fact from a variety of angles, including political, legal, geographic and historical, the two waterways are drastically different from the viewpoint of Chinese interests.

This argument does not stand up to even a cursory examination of the limits of China’s capabilities in the far north, and the distinct conditions there. Second, a hyper-focus on this supposed link creates a distraction from the actual and pressing security problems of the Arctic, including those related to climate change and its socio-economic effects on the peoples of the region.

During the former Donald Trump administration in the United States, Washington sought to redefine the most pressing security threats in the Arctic, downplaying the effects of climate change and human security in favour of pointing to Russia and China as great power threats.

Often, the South China Sea dispute was summarily dropped into the dialogue, ostensibly as irrefutable proof of China’s grand polar strategic agenda and intentions to subvert Arctic rules and norms.

For example, at the Arctic Council ministerial meeting in Rovaniemi, Finland, then-Secretary of State Mike Pompeo, in a now-infamous 2019 speech, sought to delegitimise Chinese interests in the region, including with the statement, “Do we want the Arctic Ocean to transform into a new South China Sea, fraught with militarisation and competing territorial claims?”.

This thread was later picked up by Admiral James Foggo of the US Navy, who noted in June 2020 that, “With China having its own precedent for making bogus claims over international waterways in the South China Sea, it’s possible that China will also seek to bend the rules in their favour in the Arctic”.

These statements and others demonstrated that drawing a line between the Arctic and the South China Sea does get attention, but at the same time this practice evades the pertinent questions of why and how Beijing may be seeking to become a “gatecrasher” in the Arctic.

In looking at the problems with the comparison, the first step is to recognise that despite the stubborn myth of the Arctic as an open space, to be claimed by whomever arrives first – much of the region, including areas with exploitable resources, are well within the territorial waters and exclusive economic zones (EEZs) of Arctic states.

As with any other sizeable body of water, the Arctic Ocean is governed by international law, including the United Nations Convention on the Law of the Sea (UNCLOS), of which China is an adherent, (unlike the United States, which still has yet to ratify the agreement).

This is where a comparison between the Arctic and the South China Sea meets its first obstacle, as Beijing’s stance on South China Sea sovereignty is based on territorial claims and the concept of historical waters. Neither of these conditions are present in the Arctic Ocean, and that is not likely to change.

This limitation was acknowledged in China’s 2018 governmental White Paper on the Arctic, where it was stated that while non-Arctic states do have rights in regards to engaging in scientific and economic activity, “states from outside the Arctic region do not have territorial sovereignty in the Arctic”.

China is not an Arctic state, has not challenged the sovereignty of any Arctic government, nor has it endeavoured to undermine regional organisations such as the Arctic Council.

Policymakers in Beijing have in fact, on more than one occasion, advocated greater engagement by non-Arctic states in emerging areas of regional governance, including in environmental areas.

China has joined several other states outside of the Arctic, including Britain, Germany and Japan, in suggesting that there is space for non-Arctic actors in discussions of the region’s future.

Beijing has also been active in other recent policymaking activities in the far north, including the drawing up of the 2017 Polar Code and the fishing moratorium in the Central Arctic.

China, as a relative latecomer to regional affairs, is still learning about the region in many ways. A vast majority of Beijing’s Arctic interests, including research cooperation, current and potential joint ventures, and use of emerging Arctic sea routes, remain heavily dependent on the goodwill of the eight national governments in the far north.

This situation is particularly evident in the case of Moscow, as despite closer Sino-Russian economic cooperation

in Siberia, Russian policymakers have clearly indicated there is a sharp difference between the rights of Arctic versus non-Arctic actors, and this is unlikely to change given the growing importance of the Russian Arctic to Moscow’s ambitious economic planning.

This represents an additional obstacle in attempting to associate the Arctic with the South China Sea.

Arguments that a Chinese military presence in the Arctic is looming and inevitable thus often fall into what might be called the “Schrödinger’s Russia” trap, meaning the perception that Moscow is pursuing an aggressive policy of militarising the Arctic, but will become passive if China seeks to do the same.

Looking at recent developmental and strategic policies unveiled by the Vladimir Putin government involving its Arctic lands and waters, this scenario is dubious at best.

Russia is looking to China for various Arctic partnerships, but has shown every sign of taking exception to the prospect of opening up the region to outside security interests, including Beijing’s.

Looking beyond Russia, China’s political maneuvering room in the Arctic at present is shrinking, not increasing.

Relations with two major Arctic governments, Canada and Sweden, remain in a tailspin, plans for Polar Silk Road-related infrastructure plans in the Nordic and Baltic regions have run into extensive opposition in state capitals, and Denmark is becoming progressively wary of Chinese economic interests in Greenland.

There were likely many sighs of relief in Copenhagen and Washington when the April parliamentary elections in Nuuk resulted in the halting of a planned mining project which was supported by a Chinese firm.

Much of China’s Arctic activity in the past decade has been with an eye to attaining the status of an accepted regional partner, but this goal has started to collide more frequently with geopolitical realities.

This leads to the third major obstacle to comparing the Arctic to the South China Sea. In recent years, Beijing has been seeking to add layers of strategic assets to the disputed sea, including “white hull” ships of the China Coast Guard and “blue hull” irregular militia vessels, which have recently been active near the Whitsun Reef.

This scenario is not possible in the Arctic, due to the serious limitations China would face in seeking to unilaterally undertake a military agenda in the region, and also because the cost/benefit ratio of such an action would assuredly not be in Beijing’s favour.

China would seek to avoid triggering further militarisation of the Arctic, since that would instantly place Beijing at a disadvantage, swiftly eroding any and all regional gains already made.

A decade ago, with frequent talk of an Arctic scramble for resources in the wake of high fossil fuel prices, there was also discussion of a so-called “melon scenario” involving the Arctic Ocean being apportioned by the Arctic governments, with all other states having limited access and influence.

China wishes to avoid that outcome, and therefore is further restrained in potentially treating the Arctic simply as a colder South China Sea.

It would be incorrect to argue that China has no strategic interests in the Arctic, and indeed the Polar Regions have been cited as a “new strategic frontier” by Beijing.

As well, there are serious questions emerging regarding civilian projects, such as missions undertaken by China’s two icebreakers and plans to deploy a satellite to monitor Arctic shipping, which have the potential for data to be accumulated for strategic use.

It is nonetheless crucial when examining China’s Arctic agenda, and when studying the overall questions of Arctic security in general, to distinguish preferences from capabilities, and the actual versus the hypothetical. Dropping a South China Sea model onto the Arctic was, and still is, an unworkable method to accomplish this.

The Arctic is not the South China Sea, it is the Arctic, and to best understand China’s polar interests, the spurious narrative of strategic similarities between the two waterways needs to be cast aside.

Marc Lanteigne is an Associate Professor of Political Science at UiT – The Arctic University of Norway, Tromsø, specialising in Asia-Pacific and polar regional politics. He is also the editor of Over the Circle, an Arctic news blog

Source: This Week in Asia