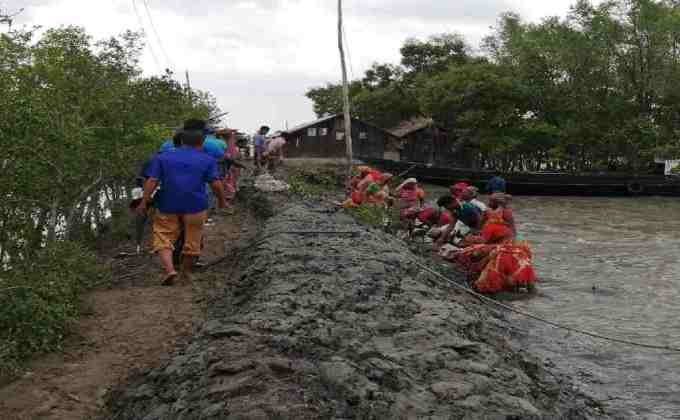 More than 50 villages in four unions of Khulna's Koyra upazila have been inundated by tidal surges triggered by Cyclone Yaas.

In the four unions of Koyra, embankments have been damaged at 11 places. Dams of the Bangladesh Water Development Board on Kapotakkho, Koyra and Shakberia rivers were also damaged due to high tidal waves.

The upazila administration has said that the losses in the four unions are estimated to be around Tk 35 crore. This is because large tracts of farm land, fish and cattle have been swept away by tidal surges.

About Tk 15 crore worth of fish have been lost in the impact of the cyclone.

More than 5,000 people rendered homeless are currently staying in shelters. Efforts are on to move others stranded in their homes to safer places, officials said.

On Wednesday, 11 embankments were damaged, as a result of which saline water of the rivers marooned 35 villages. Later,  the residents managed to block only eight points. As a result, another 15 to 20 villages were inundated by Thursday noon.

Although the fear of the cyclone has subsided, people of the area are spending sleepless nights fearing an imminent collapse of the Kateni dam.