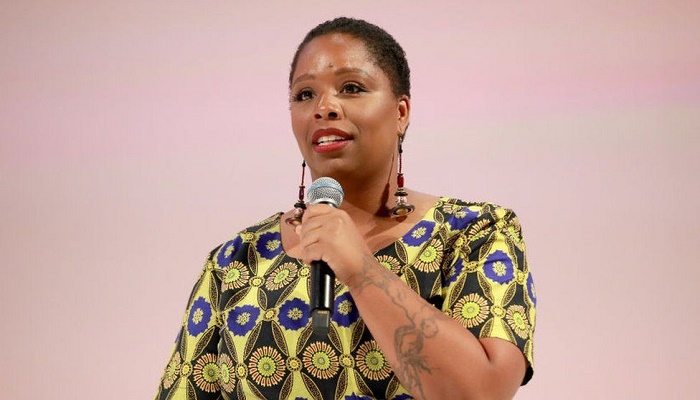 Black Lives Matter's co-founder says she is resigning from its foundation, but not because of what she called right-wing attempts to discredit her.

Patrisse Cullors said she will leave the foundation that she has led for nearly six years on Friday.

The 37-year-old activist's finances came under scrutiny last month after it was reported she owned four homes.

Black Lives Matter has become a global rallying cry since she and her co-founders created the hashtag in 2013.

Ms Cullors said she would step down from the Black Lives Matter Global Network to focus on her forthcoming second book, An Abolitionist's Handbook, and a TV development deal with Warner Bros highlighting black stories.

In a statement, she said: "With smart, experienced and committed people supporting the organization during this transition, I know that BLMGNF is in good hands.

Ms Cullors told the AP news agency her resignation had been planned for more than a year and was not related to baseless claims that she had misused donations to acquire her property portfolio.

"Those were right-wing attacks that tried to discredit my character, and I don't operate off of what the right thinks about me," she said.

The BLM Foundation told AP in February that it had raised $90m (£63m) amid last year's racial justice protests following the murder of George Floyd in Minneapolis, Minnesota.

The foundation said it ended 2020 with a balance of more than $60m, after operating expenses, grants to black-led organisations and other expenses.

Last month the New York Post reported that Ms Cullors - a self-described Marxist - had bought a $1.4m luxury home in Topanga Canyon, near Malibu, and owned three other homes, including a custom ranch in Georgia.

Conservative critics - but also some black activists - called for an investigation into whether Ms Cullors had used the organisation's funds to enrich herself.

The Black Lives Matter Foundation said in a statement: "As a registered 501c3 non-profit organization, [the foundation] cannot and did not commit any organizational resources toward the purchase of personal property by any employee or volunteer.

"Any insinuation or assertion to the contrary is categorically false."

Ms Cullors appeared to hold back tears as she told the Black News Channel last month that suggestions of financial impropriety against her were "categorically untrue and incredibly dangerous".

The grieving parents of Michael Brown and Breonna Taylor - two African Americans whose deaths at the hands of white police officers were often cited by Black Lives Matter - last month reportedly complained the organisation had done nothing to help them.