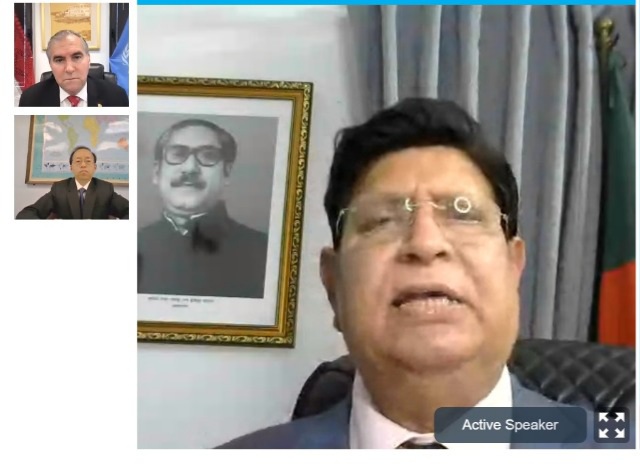 Meaningful transfer of technology, access to aid for trade, exemption from intellectual property rights so that LDCs can produce COVID19 vaccines and other life-saving medicines are essential for providing meaningful support to the LDCs, said Foreign Minister AK Abdul Momen when he delivered a statement virtually at the United Nations Headquarters in New York on Thursday.

Momen was the keynote speaker at the thematic discussion on enhancing international trade and regional integration for the LDCs.

Foreign Minister also stressed on the need of South-South and Triangular Cooperation in the area of trade and technological cooperation for benefitting the LDCs.

He also highlighted the catalytic role that aid for trade can play in helping the LDCs. He referred to the Addis Ababa Action Agenda, which had set a target to increase the share of the LDCs, and flagged that the target was yet to be fulfilled.

Foreign Minister Momen referred to the ongoing pandemic of COVID19, and its impact on LDCs’ economies.

He strongly advocated for providing support to the LDCs in the area of digital infrastructure, in particular e-commerce.

In this regard, he also referred to the sharp decrease in the income of LDCs from service sector during the pandemic, flagging that because of dependence mostly on tourism sector, many of the LDC economies are suffering now.

He also called for enabling safe, regular and orderly mobility from the LDCs in this regard.

Momen also called for immediate implementation of all decisions of the WTO Ministerial Meetings in favour of the LDCs, including removal of non-tariff and different standards related barriers.

He stressed on the importance of transfer of technologies to LDCs, as provided for in WTO rules to address the digital divide between developed countries and the LDCs.

Foreign Minister flagged the importance of affordable access to COVID19 vaccines by the LDCs.

He highlighted that there was a huge shortage of vaccines in the LDCs, and suggested that the LDCs should be provided with financial and technical support for producing COVID19 vaccines and other life saving medicines.

Momen also highlighted the importance of providing support to the graduating LDCs, including providing them with continued LDC-specific support for 12 years after graduation.

The Foreign Minister called on the Developed and Developing country Member States of UN to help the graduating LDCs for their smooth and sustainable graduation.