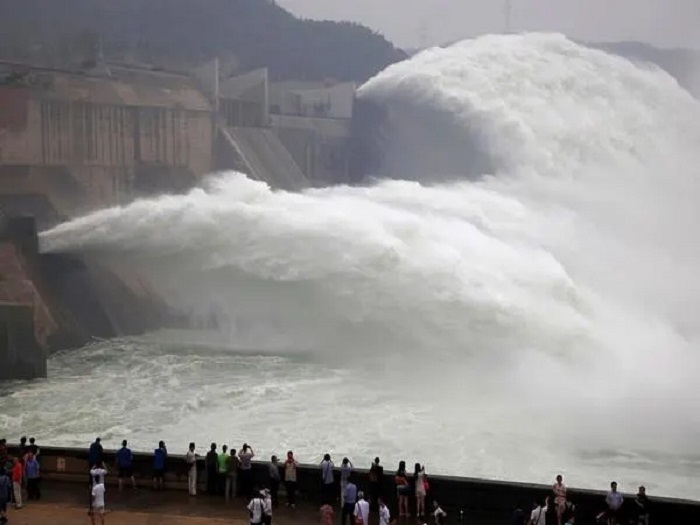 Vijitra Duangdee, writing in South China Morning Post (SCMP) said that not only gold is disappearing but, the diets, livelihoods and environment of 60 million people have been jeopardised by the dams, and that effects are getting starker.

By the time the Mekong reaches in Loei, on the Thai-Laos border, the water gets already strained through a dozen dams - 11 of them in China and one in Laos.

The dams, said locals and experts, have decimated fish habitats and changed the natural seasonal flow of the water, and even its colour, reported SCMP.

'I used to find pieces of gold the size of a tamarind seed,' said Rodjana Thepwong, 64, one of the gold panners from Thailand. 'Now there are only tiny amounts', she added.

Rodjana Thepwong said that earlier gold panners used to wade to the middle of the river in the dry season. "The sediment was full of gold, I used to find pieces the size of a tamarind seed," she said, hacking into the river bank with a pickaxe and removing clumps of mud and stone.

"Since the dams were built the river water rises and falls randomly and the ecosystem is off balance, we have to pan on the edge of the river where there are only tiny amounts of gold," she added.

60 million people depends on the Mekong as it flows from China, through Myanmar, Laos, Thailand and Cambodia before emptying into Vietnam's delta, reported SCMP.

Activists say the protein-laden fish diets, livelihoods and environment of those millions have been put in jeopardy as mainly Chinese, Thai and Vietnamese companies tap the river for hydroelectric power, wrote Vijitra Duangdee.

"I realised things were changing when the fish died and the water rose suddenly," said Hieng Chantarasee, 70, another gold panner sitting on a foot-high plastic stool semi-submerged in the water.

The changes are getting starker. Further downstream, in February this year, the river suddenly turned aquamarine, a new seasonal phenomenon that shows the vital nutrient-carrying silt is leaving the waterway, experts say. Climate change is also playing a role with heavier monsoons and longer droughts, reported SCMP.

But Rodjana and Hieng feel sure the dams are to blame for the deteriorating health of a river that has been their families' playground and source of food and income for generations.

"It's distressing. But what can we do?" Rodjana said. "All we ask is please don't build any more dams."

Thailand is slowly turning against the dams, with river communities lobbying for a pause in development and officials beginning to openly debate the need for the electricity generated by hydropower and set to be sold to the kingdom, wrote Vijitra Duangdee.

"The development of the Mekong has reached the point of no return," said Tosapol Wongwan, assistant to the Secretary General, Thailand's Office of the National Water Resources.

Gradually, upstream countries - China and Laos - have begun sharing data on water flows and forewarning of dam closures and release to the downstream neighbours.

But full transparency is hard to achieve between countries with competing strategic, economic and national security demands, reported SCMP.

Meanwhile, China, which is driving the dam-building spree, insists hydropower is an environmentally friendly resource to drive the economies of the Mekong, and says claims to the contrary are groundless and politicised.

But as the dam-building continues the forecast for the river is ominous, according to Songrit Kirk Pongern, a Mekong researcher and academic at Thailand's Kasetsart University.

"In five years' time the impact will be seen more clearly," he said. "The fish population will continue to decline; downstream will be starved of sediment, riparian and local fishing will vanish and food security for 60 million people will be depleted."