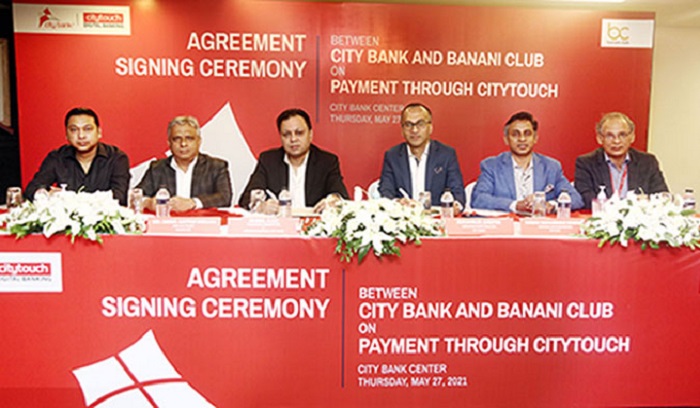 Under this agreement, over one thousand members of Banani Club are now able to pay the bills and fees using the City Bank’s digital banking platform ‘Citytouch’ anytime from anywhere.

Rubel Aziz, President of Banani Club and former Chairman of City Bank and Mashrur Arefin, MD & CEO of City Bank signed the agreement on behalf of their respective organizations. Among others present were Additional MDSheikh Mohammad Maroof, Head of Digital Financial Services Zafrul Hasan, Head of IT Mohammed Anisur Rahman of the Bank and Md. Abdul Gaffar Mollah, Director Finance and Makin-Ur-Rashid (Rossi), Director Administration of Banani Club and other senior officials.

Banani Club President Rubel Aziz said the club has been working for improving the facilities for its members and Citytouch will offer a much needed 24 X 7 service platform for the club members.

City Bank MD & CEO Mashrur Arefin mentioned that Citytouch has emerged as the most convenient platform from bank customers in the country. He thanked Mr. Rubel Aziz for spearheading the launch of Citytouch back in 2014 when Mr. Aziz was the bank Chairman.

City Bank has been offering the state-of-the art digital banking service with Citytouch platform on mobile and desktop while the introduction of WhatsApp Banking has set a new benchmark in the service.