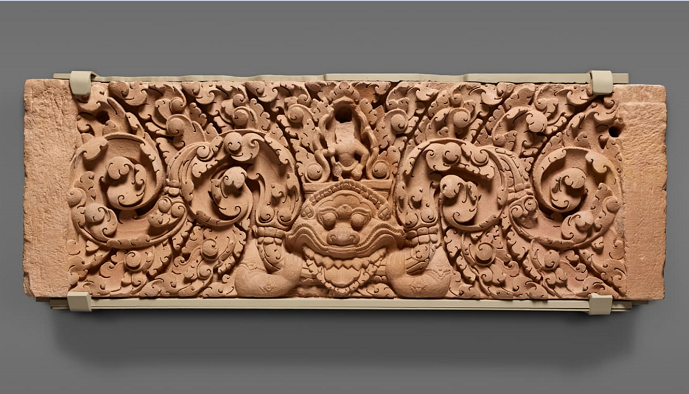 A pair of 1,000-year-old religious relics, which US investigators say were illegally taken from Thailand, have been returned after more than five decades.

The stone lintels had been housed at San Francisco's Asian Art Museum since the 1960s. But the city formally handed the artifacts back to Thai officials at a ceremony in Los Angeles on Tuesday.

Each weighing around 1,500 pounds, the sandstone items date back to the late 10th and 11th centuries, according to the Asian Art Museum. They originated from ancient temples in northeast Thailand, and were acquired by the museum in the 1960s via Avery Brundage, a former president of the International Olympic Committee and an avid collector of Asian art.

In 2017, however, the Department of Justice learned that the items had been "illegally taken" from Thailand, which outlaws the unauthorized export of historical artifacts. The Thai Embassy in Washington, D.C., also said it believes the engravings were illicitly exported in the 1960s during the Vietnam War.

The museum indicated that it would willingly deaccession the items in September 2020. US officials nonetheless filed a civil complaint seeking their forfeiture the next month. A settlement was then reached with the city of San Francisco in February of this year.

In a statement, the Thai Embassy said "the return of these antiquities holds great importance in terms of history, archeology and culture to the Thai Government and the Thai people."

"In general, we are very happy to know that these objects are returning to Thailand, where we have long believed they belong," he said in a phone interview. "So, we are supportive of this and quite delighted that they have made this final step."

Disputed origins
But despite agreeing to the forfeiture, the museum maintains that US authorities are yet to present "affirmative evidence" that the items were illegally taken. In an earlier statement, the museum said its own studies had "found no evidence that these lintels were removed from their sites contrary to the laws of Thailand."

Mintz added that Brundage had donated one of the lintels and "facilitated the purchase" of the second. "At that time ... the assumption was that dealers had legitimately acquired them from dealers in Southeast Asia," he said.

However, Mintz added that museum researchers were unable to locate copies of export documents that could prove the Thai government authorized the lintels' export.

"Because the dealers who sold these works to Mr. Brundage are no longer are alive, we will never be able to determine whether those documents ever existed," he said. "Certainly, we can say we don't have them. So, as a result, we ... say these objects really belong back in communities from which they came."

Announcing the settlement in February, Tatum King of Homeland Security Investigations, which led the investigation, said in a statement that "the successful outcome of this investigation helps restore Thailand's cultural heritage for the appreciation and study of this and future generations.

"The theft and trafficking of cultural artifacts is a tradition as old as the cultures they represent," he added.
Mintz said that the Asian Art Museum has stepped up efforts to ascertain whether its collection contains illicitly acquired artifacts.

He added that curatorial staff have begun "systematically investigating" its collection, "to make sure that we have as complete an understanding of the provenance of each object as possible -- and to call out those objects that have gaps in their provenance."