RTHK: How authorities cracked down on Hong Kong's only public broadcaster 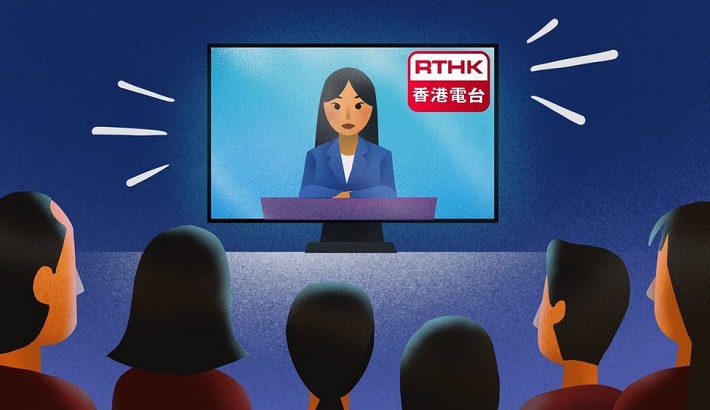 How authorities cracked down on Hong Kong's only public broadcaster

RTHK: How authorities cracked down on Hong Kong's only public broadcaster

As the crackdown on dissent continues in Hong Kong with pro-democracy protesters and politicians detained and jailed, there are now fears for the independence of its flagship public service broadcaster and media freedom as a whole.

The critically acclaimed Radio Television Hong Kong (RTHK), founded in 1928 when Hong Kong was still under British rule, has its editorial independence guaranteed in a charter and is often called Hong Kong's version of the BBC.

But things have changed in a very short span of time.

News programmes are being pulled at the last minute, senior staff are quitting in quick succession and a journalist who became a household name for grilling Hong Kong leader Carrie Lam was fired.

Ms Lam herself was given air time four times a day to promote Chinese imposed electoral changes that will reduce the number of directly elected lawmakers.

The head of the station - a journalism veteran - was "released" six months ahead of his contract and replaced with Patrick Li, a career bureaucrat with no media experience.

Supporters of RTHK and its independent public service agenda are outraged.

"The world has been turned upside down," one RTHK journalist who wished to stay anonymous for fear of reprisals told the BBC, adding that the newsroom "used to be open and free".

She says there is no transparency over editorial decisions, meaning that frontline staff have little idea about why certain programmes are taken off the schedule, or why production is halted on others.

"When making editorial decisions, it needs a lot of discussion. It shouldn't just be an order from above," she said. "Now, everything is decided by [Mr Li]. Is his decision absolutely right and unchallengeable?"

But pro-Beijing lawmakers and supporters have welcomed the latest changes, saying that RTHK's news coverage has been biased and its editorial freedom should not be absolute.

Observers say the heart of the issue is RTHK's awkward position as a public broadcaster even while it remains a government department. The government controls funding, and has the power to appoint senior management.

Dr Cheung Chor-yung, who teaches politics at the City University of Hong Kong, said that the charter which guarantees RTHK's editorial independence is "flimsy" protection, adding that it was only able to retain it for so long because of self-restraint by authorities.

That appears to have ended.

At that time, this kind of criticism wasn't enough to take it off air.

Spurred by Hong Kong's pro-Beijing bloc - who said its protest coverage had "incited hatred towards the country, the city government and the police force" - there is new scrutiny on RTHK that has directly impacted its shows and journalists.

Among them is Bao Choy, who was a freelance producer for RTHK's acclaimed documentary series "Hong Kong Connection".

She was recently found guilty and slapped with an unprecedented fine for illegally using a car registration search as part of her work on a programme. It had been investigating police involvement in a mob attack that injured dozens of pro-democracy protesters and passers-by at a train station on 21 July 2019.

Ms Choy had helped identify people involved in the mob attack. Her contract has not been renewed.

Another controversy focused on television presenter Yvonne Tong who resigned in April.

She had drawn fire for challenging WHO Assistant Director-general Bruce Aylward over Taiwan's membership to the body in March 2020. The government said the show had breached the "One China" principle. China sees the self-ruled island as part of its territory.

And Headliner stands indefinitely suspended after an episode in February 2020 where one of the hosts, in police uniform, jumped out of a rubbish bin and mocked police officers for having more protective gear than other government workers handling the pandemic. It drew more than 3,000 complaints, prompting the station to apologise to the police.

Furthermore, in February, following a ban on the BBC by mainland China, RTHK announced that it was suspending the relaying of BBC World Service radio it had previously aired daily.

It also removed a weekly Cantonese programme from the BBC's Chinese Service from its schedule.

But staff say several other programme episodes - including one episode of "Hong Kong Connection" about the electoral changes which featured interviews with pro-establishment and pro-democracy figures - were not allowed to air.

Soon after he took the helm at RTHK on 1 March, the station introduced a "new editorial management mechanism" in which an editorial committee headed by Mr Li would have the final say in all matters related to "contentious" news programmes.

And unlike his predecessors, Mr Li has not accepted the invitation of the RTHK Programme Staff Union to attend meetings with the general staff.

In a statement to the BBC, RTHK said the management felt it was "not appropriate to discuss editorial issues" at such meetings, and editorial decisions are communicated to employees "through various means in accordance with the chain of command".

It also reiterated that Mr Li's reforms would ensure that programmes are "impartial, unbiased and accurate".

Pro-Beijing lawmaker Eunice Yung, who had previously criticised RTHK as being biased, said that the reforms would ensure "impartiality".

"Now that there is a new director of broadcasting. He has a stronger view or way of ensuring impartiality under the charter. He is, after all, the editor-in-chief. He has the ultimate decision power and this should be respected," she said.

"I am looking forward to seeing a totally new RTHK," she added, reiterating that it is "a government broadcaster, and under the structure of the government".

Media commentator Allen Au says however, that "the establishment does not understand the meaning of public broadcasting".

"Many of them think that RTHK should not bite the hand that feeds it… but public broadcasting does not serve the government, but the public."

Analysts say the changes to RTHK are yet another sign that Hong Kong's freedoms are rapidly shrinking as China continues to stamp its authority on the city state.

"2019 was a turning point and [the crackdown] does not only target RTHK," says Dr Cheung.

"It targets the whole of Hong Kong."