5 die, many houses damaged by ‘Yaas’ 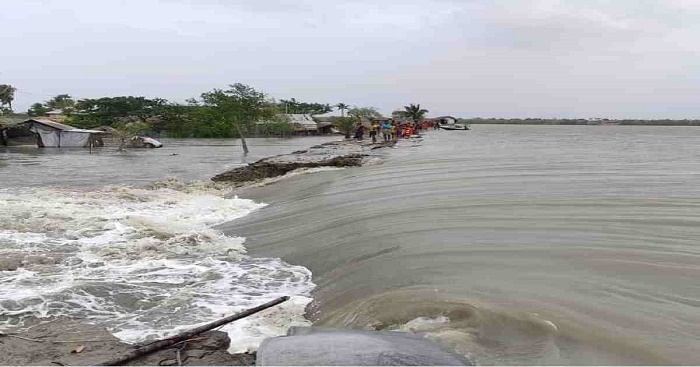 At least five people have died and hundreds of houses have been damaged by cyclone ‘Yaas’ in Bangladesh which made a landfall in Odisha coast in India on Wednesday.

The cyclone which formed in the Bay of Bengal crossed North Odisha-West Bengal coast between north of Dhamra and south of Balasore, said Bangladesh Meteorological Department (BMD).

Under the influence of the cyclonic storm, many coastal areas of Bangladesh have been submerged by tidal surges.

A good number of houses, streets, embankments and structures in the coastal belt have been affected due to the gusty winds  and tidal surges that saw up to 6 feet high than the regular astronomical tide during the storm.

A lighterage ship loaded with stone sank in the Bay of Bengal near Bhashan Char area. Two helicopters of Bangladesh Air Force rescued 12 crew of the ship.

In Bhola, a farmer died when a tree fell on him in Kalma Union under Lalmohan upazila of the district in a storm on Tuesday night.

Out of 40 chars in Bhola, at least 30 have been flooded and some areas went under five to six feet water.

At least 5,000 people have been evacuated from the remote upazila Monpura and brought to the shelter, said Monpura Upazila Nirbahi Officer Mohammad Shamim Mia.

Prashanta Kumar Roy, relief and rehabilitation officer who is in-charge of the Barishal control room, said cracks have been developed on a 300-metre embankment at the old Hijla point of Barishal.

Different points on Kazir Char road of Muladi upazila have been completely destroyed while different points of embankment of Nalua union in Bakerganj were also damaged but locals repaired it.

Besides, low-lying areas in Barguna, Patuakhali, Khulna, Satkhira and Pirojpur were also flooded.

In Feni, a fisherman died when he went to catch fish amid the storm.

Maximum sustained wind speed within 64kms of the severe cyclone centre was about 89 kph to 117 kph in gusts or squalls, said a BMD bulleting.

Under the influence of steep pressure gradient, Khulna, Satkhira, Bagerhat, Jhalakati, Pirojpur, Barguna, Patuakhali, Barishal, Bhola, Noakhali, Laxmipur, Feni, Chandpur and Chattogram and their offshore islands and chars experienced wind speed up to 60-80kph in gusts or squalls with heavy to very heavy falls, it said.

Under the influence of steep pressure gradient and the full moon phase, the low-lying areas of the coastal districts were inundated by 3-6 feet height above normal astronomical tide.

In Barguna, a 2-3ft tidal surge damaged several parts of an embankment as tidal water entered many areas.

A child named Imamul Hasan, 3, drowned when he fell into floodwater from his mother’s lap while going to a shelter at Betagi in Barguna.

In Satkhira, a tidal surge over 3-6 feet height above normal astronomical tide entered several areas after overflowing an embankment.

In Bagerhat, a tidal surge entered 20-21 villages that affected 2,700 people living in the area.

In Laxmipur, a tidal surge inundated low-lying areas of Ramgati and Kamolganj upazilas.

Ferry service on Shimulia-Banglabazar river route has been suspended as the cyclone causes high waves on the Padma, leaving over 500 vehicles and several thousand people stuck.

“The waves are large and the wind is intense. It isn’t possible to operate ferries in such conditions. So, they have been suspended,” said Prafulla Chouhan, manager of BIWTC’s river port at Shimulia.

Water entered different areas of Chattogram, marooning people and damaging some structures following the tidal surge under the influence of the cyclone.

The tidal surge also breached the protection embankments in the city’s Patenga area and some areas under coastal Banshkhali, Anwara and Sandwip upazilas.

The organisations concerned started repairing the embankments as the water started draining out gradually, he said.

They kept around 1,000 cyclone shelters prepared in coastal areas with sufficient relief assistance, said the magistrate.

No casualty due to the cyclone was also reported in the city and district till filing of this report.