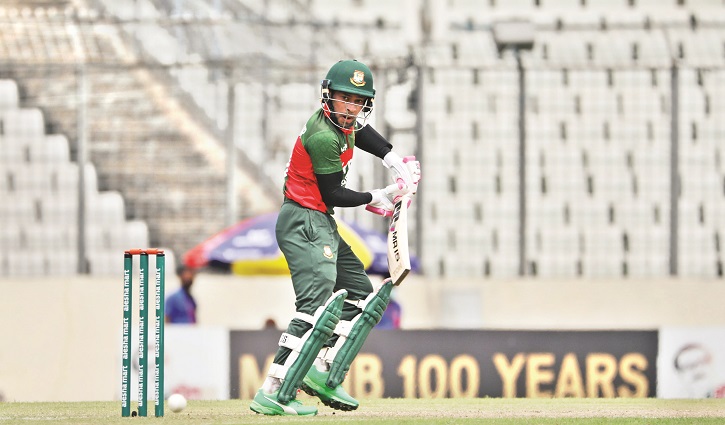 Bangladesh wicketkeeper-batsman Mushfiqur Rahim urged the youngsters to take responsibility regularly to help the team grow stronger as well release the load from the shoulder of the seniors.

Bangladesh clinched their maiden ODI series win over Sri Lanka on their way to the top of the ICC World Cup Super League points table by registering a comprehensive 103-run victory in the D/L method in the second one-day international in Dhaka on Tuesday.

Mushfiqur won back to back man-of-the-match awards after making 84 and 125 runs respectively in the two matches while Mahmudullah played two handy knocks of 54 and 41 runs respectively while skipper Tamim Iqbal also scored a fifty in the first game.

However, none of the batsmen from the next generation could play any responsible knocks on both occasions putting all the pressure on the seniors.

“I think if a team has seven or eight performers, the team will more often than not come out on top if they perform regularly,” Mushfiqur said on Tuesday.

“After Tamim and Shakib got out early, there was an opportunity for Liton, Afif and Mosaddek, who got a chance. They are trying but they have to be more selective. One has to know when to play a low-risk and when to play high-risk shots on this type of wicket.

“There was more pace and bounce on the wicket than the first ODI. The ball was coming onto the bat. I told Liton (Das) that we can shift the momentum by playing to the merit of the ball for those early five to seven overs. We planned to get 20-odd runs at that stage. Liton was batting well but unfortunately got out.

“I hope they become more mature but I'd be pleased if they can quickly take a lesson from here. It makes things difficult when the pressure comes upon us in big and normal matches. If they start contributing, Bangladesh will become a stronger one-day team,” he added.

Mushfiqur added that he’s satisfied with his contribution to a winning cause but added that there is still room for improvement as he failed to stay till the end of the game.

“Like every century, this too is a special innings as the team wins,” he said. “It contributed to our first ODI series win over Sri Lanka so it will inspire me to do better in the coming days,” said Mushfiqur.

“I’m happy but there is an area of improvement for me like we missed out on the last eleven balls and in a close contest, those 10-20 runs become crucial for us,” he added.