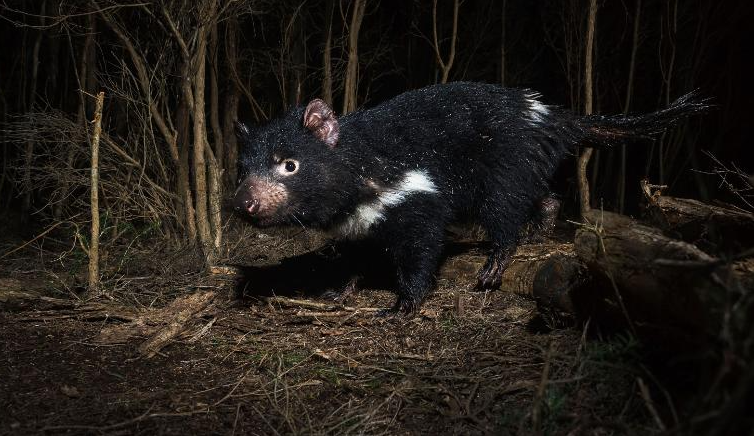 Tasmanian devils have been born in the wild in mainland Australia, more than 3,000 years after they died out in the country.

Tasmanian devils died out on the mainland after the arrival of dingoes -- a species of wild dog -- and were restricted to the island of Tasmania. However, their numbers suffered another blow from a contagious form of cancer known as Devil Facial Tumor Disease (DFTD), which has killed around 90% of the population since it was discovered in 1996.

Last September, Aussie Ark introduced 11 of the creatures back into the wild in mainland Australia, following an earlier trial involving 15 of the marsupials, bringing the total of Tasmanian devils on the mainland to 26.
And now, just months after their release, the creatures have successfully reproduced -- and conservationists have identified the tiny marsupials, which they say are the size of shelled peanuts, inside the pouches of the mothers.

Female Tasmanian devils give birth to between 20 and 40 joeys at once, according to Tourism Australia. The joeys race to the mother's pouch, which only has four teats. Those that make it to the pouch carry on living there for around three months.

"We have been working tirelessly for the better part of 10 years to return Devils to the wild of mainland Australia with the hope that they would establish a sustainable population. Once they were back, it was entirely up to them," Aussie Ark said in a statement on Monday. "We had been watching them from afar until it was time to step in and confirm the birth of our first wild joeys. And what a moment it was!"

Tasmanian devils are the world's largest carnivorous marsupials and are native apex predators. This means their reintroduction will help control populations of feral cats and foxes that hunt other endangered species. Devils are also scavengers, which helps to keep their environment free from disease.

In Tasmania itself, there are only 25,000 devils are left in the wild, according to Aussie Ark.
"We've been able to historically -- albeit in its infancy -- return the devil to mainland, and today is another milestone entirely," Tim Faulkner, president of Aussie Ark, said in a video posted on Instagram.