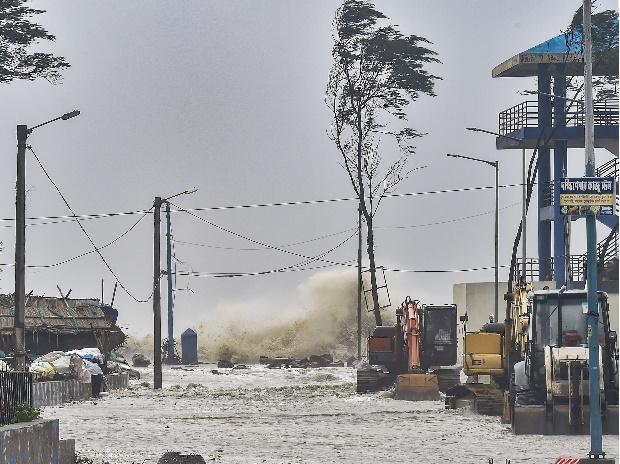 Here are the top 10 points in this big story:

1.         The weather office said Cyclone Yaas is likely to move northwestwards and weaken gradually into a cyclonic storm in the next two hours. The wind speed at the centre of the cyclone at this time is 80-90 kmph.

2.         Although landfall has been completed, heavy rains are still predicted and fishermen have been advised not to venture out to sea. Jharkhand is on on high alert and officials have begun evacuating people from low-lying areas in vulnerable districts like East and West Singhbhum. Odisha also remains on high alert.

3.         Worst-affected districts in Odisha on Wednesday were Balasore, Bhadrak, Jagatsinghpur and Kendrapara. In Bengal, South and North 24 Paraganas, Digha, East Medinipur and Nandigram were among the worst-hit. Thirteen low-lying parts of Kolkata were flooded.

4.         Bengal Chief Minister Mamata Banerjee said one person died in Digha town - he was reportedly dragged out to sea when he tried to catch fish. The coastal town was "swamped" by waves the height of a double-decker bus, news agency AFP said. Two others were electrocuted Tuesday, news agency ANI reported.

5.         Ms Banerjee said over 15 lakh people had been evacuated, three lakh houses damaged and 134 embankments destroyed. High tide in rivers had worsened the impact and an estimated one crore people had been affected, she said. The state has allotted relief material worth ₹ 10 crore, the Chief Minister added. Villagers have been cautioned against going home, with weather reports still predicting strong wind and heavy rain.

6.         Bengal suffered extensive damage to agricultural land (due to ingress of salt water), fishery, animal husbandry and horticulture facilities. Around 20,000 mud houses and temporary shelters were either destroyed or damaged, news agency Reuters said. Minister Bankim Hazra said: "I have not seen anything like this before" after sea waters inundated low-lying areas in Digha, where a police station was flooded.

7.         There has been no major damage reported from Odisha so far, although trees have been uprooted in Bhadrak district and some areas have been flooded. The government has warned people that heavy rains may continue and has urged them to stay indoors. Around 5.8 lakh people were shifted from low-lying regions in Odisha.

9.         Naval base INS Chilka is co-ordinating relief efforts with operations supported by Eastern Naval Command Headquarters in Visakhapatnam. The Army has deployed 17 columns in Bengal. Three columns and an engineering force have been sent to Odisha. The Air Force's Eastern Command, which is based in Meghalaya, has also moved to help.

10.       Yaas, like Tauktae, strikes as India battles a devastating second wave of Covid infections. Officials fear the storm will complicate efforts to halt the surge in cases. Masks are being distributed at emergency shelters but maintaining social distancing will be a challenge. Vaccination drives in affected areas have also been suspended.