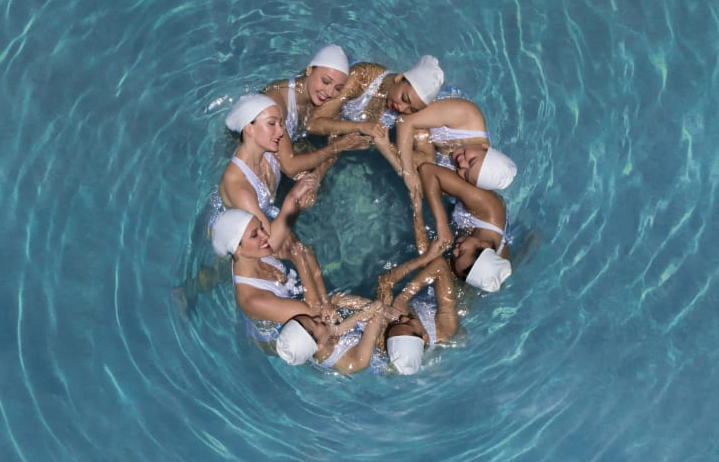 The scene is viewed from above: Eight women in white halter bathing suits and matching swim caps form geometric shapes in a pristine turquoise swimming pool. They cascade like dominoes on the diagonal, join their arms and legs in kaleidoscopic compositions, and peek out from under the white shimmery discs of open parasols.

"I'm really trying to explore different perspectives that are unseen by our eye," Walls said in a video interview from Sydney, Australia. At the same time, he wants to push "the artistic expression of drone work," a technique he believes has been somewhat overlooked by fine-art photography.

The sport once known as synchronized swimming, and now called "artistic swimming," has been part of the Summer Olympic Games since 1984. The coordinated routines -- a mix of graceful dance and acrobatics -- take strenuous effort, though the swimmers are known to put on colorful makeup and upbeat expressions as part of their presentations. Russia, the US, Canada and Japan have the most Olympic medals, with Russia dominating the sport since 2000.

When artistic swimming is televised, it is often filmed from the side, underwater, or from a high angle. But the top-down perspective used by Walls offers an unfamiliar view. "You can't see the shapes and the geometric patterns that are being formed," the photographer said. "So I just thought that low-altitude portraiture was a great way to expose that detail."

Artistic swimming often recreates spiral- and tessellation-like forms, turning a sport into a visual spectacle that appeals to Walls, who said he "always had an affinity for patterns."

Walls worked with an artistic swimming team in Sydney to shoot the series, and the routines were choreographed by Katrina Ann Hadi, a multi-gold medalist at the Southeast Asian Games and a professional artistic swimming coach. Using his phone, Walls drew out specific shapes and compositions he wanted the women to form in the pool, before flying his drone above to capture the images.

While much of the work was done in the water -- with the women treading to hold their positions -- Walls also created composites, using multiple images to enhance the symmetry.

With eight swimmers working together, "it gets exponentially harder" to direct and capture a still image, Walls said. The most difficult composition was the diagonal line, he added, as the motion of the water kept altering the formation. "You don't realize how much flow is in the water naturally," he said of the seemingly still pool. "And so (the swimmers) kept moving side to side."