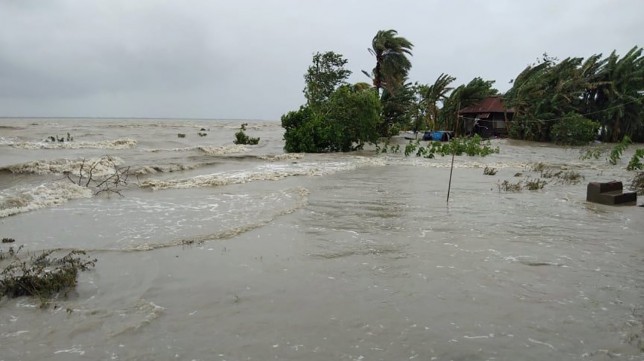 The low-lying areas of Burigoalini union in Satkhira's  Shyamnagar upazila have been inundated following heavy showers and the onrush of river water ahead of Cyclone Yaas.

Some 15 areas, including Gabura, Koikhali, Munshiganj and Padmapukur in the Burigoalini area of the upazila, have been flooded since Tuesday night, following the increase of river water level from three-to four feet.

Several coastal areas of the upazila have been witnessing heavy to moderate showers since morning.

Already 55 places in Ashashuni and Shyamnagar upazilas have been identified as risky and the villagers are working very hard to repair the damaged embankments.

However, no one has taken shelter at the cyclone shelters till Wednesday morning. This is despite repeated appeals by the local administration.

All members of the eight patrol teams of the forest department in the Sundarbans under Satkhira range have been asked to take shelter in a safe place.

Assistant Forest Conservator MA Hasan said vessels are kept on standby to rescue people in case anyone gets stranded in the storm.

Satkhira UNO ANM Abujar Gifari told UNB that around 145 cyclone centres are ready to house 75,000 people in the district. "Necessary steps are being taken to bring people to the cyclone centers."

The district administration also decided to use 1,500 schools, colleges and madrasas to rehabilitate people if required.