Mushfiq does it again 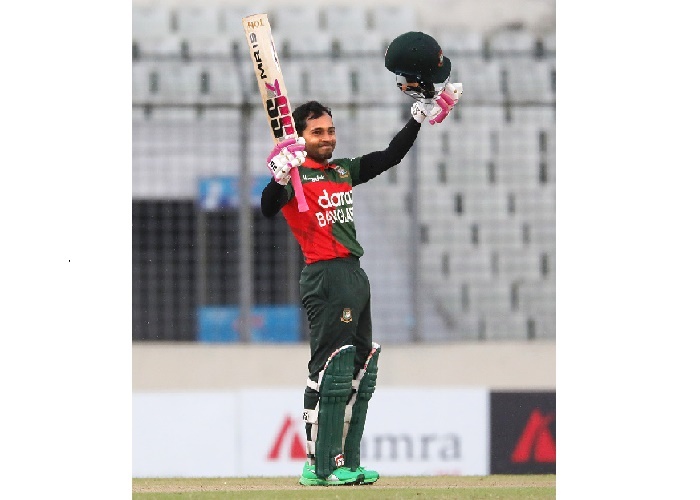 Wicketkeeper-cum-batsman Mushfiqur Rahim struck a flamboyant hundred as Bangladesh registered a massive 103-run victory  via the D/L method in the second one-day international to clinch their maiden series win over Sri Lanka in Dhaka on Tuesday.

Mushfiqur scored 125 off 127 balls, his eighth ODI hundred which propelled the Tigers to score 246 runs in 48.1 overs before Mehidy Hasan and Mustafizur Rahman took three wickets each to restrict the visitors’ innings to 141-9 in their stipulated 40 overs in a rain-affected match that brought joy to millions of Bangladeshi fans.

Mushfiqur, who played a brilliant innings of 84 runs in the series opener on Sunday, that powered the hosts to a 33-run win, continued his form despite coming in the middle in the second over of Bangladesh innings after they were reduced at 15-2.

Bangladesh, who won the toss and elected to bat first for the successive time in the series, lost skipper Tamim Iqbal (13) and Shakib Al Hasan (0) within four deliveries off pacer Dushmantha Chameera (3-44) that brought Mushifiqur at the crease to get them out of the situation.

Despite losing two more partners – Liton Das (25) and Mosaddek Hossain (10), who was one of the two changes for the Tigers alongside debutant Shoriful Islam in the match, Mushfiqur remained rock-solid in the middle and put up a crucial 87-run stand with Mahmudullah (41) for the fifth wicket.

Although Mahmudullah failed to complete his consecutive fifty in the series, Mushfiqur played his heart out with the lower-order batsmen and was finally able to reach the three-digit mark after a gap of 15 ODI innings.

Bangladesh innings saw two rain-breaks for 26 and 38 minutes respectively but it could hardly break the concentration of Mushfiqur, who reached his hundred, first at home after five and a half years, with a boundary off Chameera in the 45th over.

The Tigers then lost their last three wickets in quick succession to get bundled out with 11 balls to spare and they also received a setback by losing Mohammad Saifuddin after he had shown concussion signs.

Saifuddin, who tried to play a hook shot, was struck on his helmet off pacer Chameera and he got run out in the same delivery through a direct throw of Kusal Perera. Saifuddin was taken to the hospital straightway but there was no additional danger found in the routine checkup.

Sri Lanka, in reply, reached 70-2 in the 18th over after opener Danushka Gunathilaka and number three Pathum Nissanka made 24 and 20 runs respectively.

However, they collapsed again and were reduced at 122-9 in the 37th over before another 45-minute rain-break which only delayed the victory of the Tigers and Sri Lanka, were set a revised target of 245 runs in 40 overs after that.

The third match of the series, which is now a dead rubber, will take place on Friday at the same venue.