NOT AGAIN China will spark ANOTHER pandemic even worse than Covid as it refuses to learn lessons from outbreak, experts warn 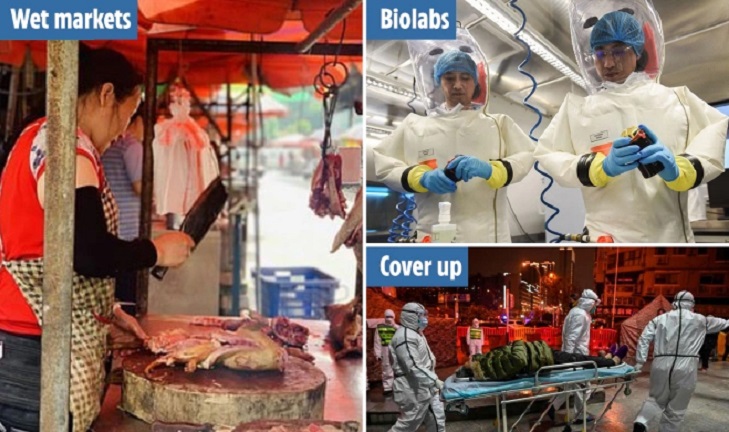 CHINA could sleepwalk the world into another pandemic even worse than Covid unless lessons are learned from this outbreak, experts have warned.

Beijing has been accused of covering up the outbreak, which is thought to have broken out in Wuhan - but the true origins remain unknown.

Experts and campaigners warned The Sun Online a mix of the ongoing proliferation of wet markets in China, potentially risky lab research, and a lack of transparency could all potentially cause another pandemic.

The world is still trying to pick up the pieces as the virus continues to rage — so far killing more than 3.3million people and still recording more than 700,000 new cases a day.

Pressure is mounting on the Communist Party to learn lessons from the pandemic and come clean - but Beijing continues to try to shift the blame.

It emerged today three scientists at a Wuhan lab were hospitalised as the virus first emerged, according to US intelligence.

Meanwhile, an independent panel ruled the devastating spread of the virus was "preventable" and China was too slow in revealing data about the new disease.

Chinese studies have attempted to claim the virus started elsewhere, Beijing diplomats have pushed conspiracy theories such as claims the virus came from a US bioweapons lab, and the Communist Party has been accused of trying to cover up the early days of the outbreak.

Gray Sergeant, from the Asia Studies Centre at the Henry Jackson Society, told The Sun Online: "When it comes to Covid, the Chinese Communist Party isn’t interest in honesty.

"The regime has imprisoned Zhang Zhan, a citizen journalist who travelled to Wuhan in pursuit of the truth, and punished Australia economically after its government dared to call for an independent inquiry into the origins of the virus.

"It is a worry that Beijing appears to value protecting its own reputation over transparency and accountability.”

Biochemist Milton Leitenberg, a senior research fellow at the Center for International and Security Studies at Maryland, University of Maryland, said he feared China could spawn another pandemic and has "most certainly not" been honest with the world about the outbreak.

Scientists who believe the pandemic may have begun with a bio-laboratory leak in Wuhan fear another virus could escape from a lab in China.

Experts have also been demanding the Chinese regime allow an international investigation which will probe further than the World Health Organisation (WHO) in February to stop it from happening again.

In a letter to the journal Science, David Relman, professor of microbiology at Stanford, said: "Theories of accidental release from a lab and zoonotic spillover both remain viable.

"Knowing how Covid-19 emerged is critical for informing global strategies to mitigate the risk of future outbreaks."

It is widely known that China has been carrying out all kinds of dangerous and ethically controversial research which may not be allowed in Western countries.

As terrible as Covid-19 has been, this is almost certainly not the last pandemic we will face — and possibly not even the worst-- Open Letter To Communist Party

It is alleged some scientists attempt to dodge regulation or ethical considerations by "outsourcing" controversial experiments to labs in China.

And the main focus of controversy following Covid is "gain of function" research, in which viruses are souped up to more easily infect humans for research purposes.

They were originally banned in the US in 2014 — but were reintroduced by the National Institutes of Health (NIH) in 2017.

And while questions swirl about the origins of Covid, some have renewed calls for a ban on the risky research.

It emerged last week Chinese scientists were considering weaponising coronaviruses in 2015 — however there is no suggestion Covid is linked to this research.

German scientist Dr Roland Wiesendanger, from the University of Hamburg, told The Sun Online: "Wet markets continue to be a threat.

"However, an even more severe threat results from risky biotech research with highly pathogenic viruses and the creation of new chimeric viruses with increased transmission capabilities and higher mortality rates for humans."

China is also planning to build up to seven more high security labs — the same as the Wuhan Institute of Virology (WIV) — by 2025 as the Communist state seeks to establish itself as a biotech superpower.

Dr Wiesendanger said Chinese scientists were carrying out gain of function research, which involves making viruses more virulent and transmissible in people, and this could unleash a new pandemic — potentially with a death rate of up to 80 per cent.

"This is true no matter where the research is performed: in China, in the US, in the UK, in the EU.

Concerns over a new outbreak in China have spurred eminent scientists in Europe, Australia and North America to sign an open letter calling for the Chinese regime to be more transparent about the origins of the outbreak amid claims of a whitewash.

The letter concludes: "As terrible as Covid-19 has been, this is almost certainly not the last pandemic we will face — and possibly not even the worst.

"Taking all necessary measures to understand the origins of this pandemic as an essential foundation for addressing our dangerous vulnerabilities is therefore a matter of great urgency.

"Doing so will also establish an important precedent for fully and transparently investigating any such outbreaks in the future wherever and however they might originate.

"We call on the World Health Organization and its Executive Board to fully address the recommendations and questions raised in this letter as a critical step toward protecting everyone on earth and future generations."

What do we know about the Wuhan Institute of Virology?

THE WUHAN Institute of Virology is the highest security lab of its kind in all of China - and can be found right at the heart of the origins of the global pandemic.

Various theories have been swirling about the lab, which is headed up by Chinese scientist Dr Shi Zhengli, known as “Bat Woman”.Most scientists do not believe the virus leaked from the lab, and the lab itself has categorically denied the claims.The lab specialised in bat-borne viruses and had been carrying out experiences on them since 2015.Airlocks, full body suits, and chemical showers are required before entering and leaving the lab - the first in China to be accredited with biosafety level 4 (BSL-4).BSL-4 labs are the only places in the world where scientists can study diseases that have no cure.Scientists from the lab even tested mysterious virus which killed three miners 1,000 miles away in Yunnan province back in 2012.It has been suggested this fatal mystery bug may have been the true origin of Covid-19.Experts at the lab also engineered a new type of hybrid 'super-virus' that can infect humans in 2015, according to medical journal Nature MedicineDespite fears surrounding the research, the study was designed to show the risk of viruses carried by bats which could be transmitted to humans.There is no suggestion the facility's 2015 work is linked to the pandemic.The lab was also recruiting new scientists to probe coronaviruses in bats just seven days before the outbreak.China has began tightening security around its biolabs with President Xi Jinping saying it was a “national security” issue to improve scientific safety at a meeting last February.

Meanwhile, wet markets remain open in China despite warnings from the World Health Organisation that they could cause another pandemic.

And the Huanan Seafood Market in Wuhan - where the virus first emerged - was identified as a threat some five years before the Covid outbreak, yet these warnings were not heeded by China.

After the initial outbreak of the "mysterious pneumonia" last December, China shut similar markets in Beijing and elsewhere — but the sale of live animals resumed just weeks later.

The markets have been dubbed "disease incubators".

"All live-animal markets are potential breeding grounds for zoonotic diseases, such as Covid-19, SARS, and MERS.

"And the next deadly pandemic is inevitable as long as markets filled with sick and stressed animals are still open."

Ms Allen said more than 150,000 people have signed PETA and our international affiliates’ petitions urging for WHO to officially ban potentially devastating live-animal markets around the globe.

PETA said it has investigated live-animal wet markets in the heart of Wuhan and found "filthy, blood-soaked" bazaars selling live fish, snakes, rodents, bats and raccoon dogs – a fox-like animal known to be a carrier of Covid-19.

It is feared their existence raises the risk of disease jumping from animal to man again before unleashing another, possibly more lethal pandemic.

China claims some of the world's strictest lockdowns, adherence to the rules, and extensive testing programmes have allowed it to beat the pandemic.

With total cases of just 90,697 and total deaths of 4,636, China has just a fraction of the cases and deaths compared to other nations - despite having the world's largest population with 1.4billion.

Pictures show the country has essentially returned to normal as museums, festival and landmarks are again packed with holidaymakers.

Documents however already revealed Beijing downplayed the bug to “protect its image“, while the US has been open in allegations that China has not been honest about its role in the pandemic.