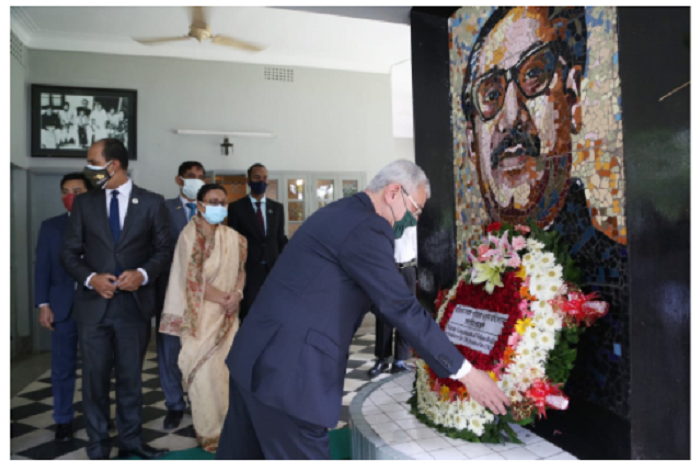 “I am reminded today of the statement he delivered to the General Assembly….he outlined the importance of peace, human rights and what is now known as sustainable development – the core pillars of the United Nations,” Bozkir wrote in visitors’ book after visiting Bangabandhu Memorial Museum in Dhanmondi.

Bangabandhu delivered the historic speech at the UNGA on September 25 in 1974.

He said it is a great pleasure to visit Bangabandhu Memorial Museum and pay his respect to the Father of the Nation in this centenary year of his birth.

The UNGA President placed a wreath at the portrait of Bangabandhu at the museum.

“It should be kept in mind that only through the united and concerted effort of the people, we’ll be able to reach our specific goal to build a better future,” Bozkir wrote in the book.

“These issues are more important now than ever before. I count on the continued support of Bangladesh to achieve our shared goals,” he wrote.

The UNGA President arrived here early Tuesday on a brief visit to Bangladesh to discuss global issues, including the Rohingya one.

He met Prime Minister Sheikh Hasina at her official residence Gonobhaban in the morning before his meeting with Foreign Minister Dr AK Abdul Momen.

The UNGA President will leave Dhaka for Pakistan on Wednesday after visiting Rohingya camps in Cox’s Bazar district.