Bhasan Char to become another example to world: UNGA President 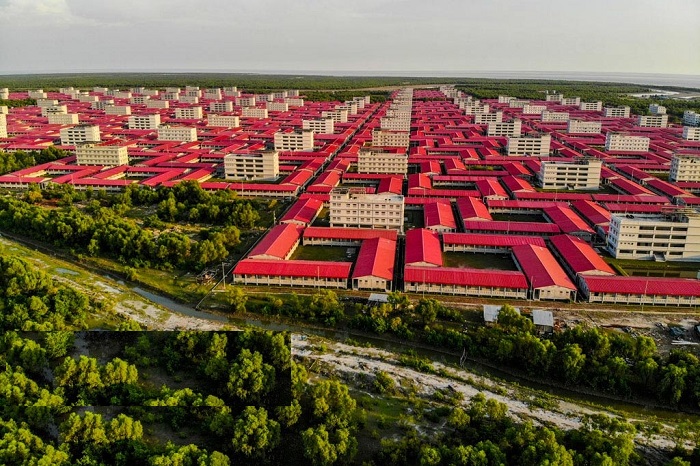 President of the 75th session of the United Nations General Assembly (UNGA) Volkan Bozkir on Tuesday highly appreciated Bangladesh's efforts for Rohingyas in Bhasan Char, saying it will be another example to the world on how to deal with the refugee issues.

“I really applaud the work done there – the quality of buildings and also taking all the precautions. I think this will be another example to the world on how to deal with refugee issues,” he said.

Bozkir hoped that this would work well for the Rohingya people, giving them a better condition in Bhasan Char.

In a joint media briefing at the Foreign Service Academy with Foreign Minister Dr AK Abdul Momen, the UNGA President said he could not visit Bhasan Char but he saw a video on it and acknowledged the high-level works there, including precautions and safety measures.

Bozkir will visit Rohingya camps in Cox’s Bazar district to meet Rohingyas on Wednesday, before heading towards Pakistan.

He will make a statement after visiting Rohingya camps.

Prior to the briefing, Bozkir had a meeting with Foreign Minister Dr Momen at the same venue.

He said this is his second visit to Bangladesh and he found it absolutely an obligation to come and pay his respect and give a message to the world on what Bangladesh is doing and what are the problems.

Bozkir appreciated Bangladesh’s role in the peacekeeping operations and sacrifices of the Bangladeshi peacekeepers for the peace and security of the world.

On climate issues, he appreciated Prime Minister Sheikh Hasina’s efforts saying her body language shows how much importance is given to issues like tree plantation.

The UNGA President said Bangladesh's role in the UN peacekeeping operations is very much appreciated.

He said Bangladesh Prime Minister Sheikh Hasina is really a leader on the climate issue.

Bozkir said he has admiration for Prime Minister Hasina for her political and humanitarian thinking and saluted the hospitality and courage that Bangladesh has shown to the Rohingya people.

“We discussed the plight of the Rohingya people, the situation in Myanmar, the impact of climate change, the importance of human-centered development, and gender equality and women’s empowerment,” he said referring to his meeting with Prime Minister Sheikh Hasina.

They also talked about the significance of the culture of people as Bangladesh is the number one troop-contributing country to UN peacekeeping operations. “It was a comprehensive and insightful discussion.”

Talking about his discussion with the UNGA President, Dr Momen said, "We discussed the Rohingya issue and we had very fruitful discussions on SDG 17, peacekeeping operations, migration and climate change issues.”

Dr Momen said they wanted him to go to Bhasan Char but because of timing he is unable to go there. “We showed him a video.”

The UNGA President delivered a speech at the Foreign Services Academy.

He signed the visitors’ book there after placing a wreath at the portrait of Bangabandhu.

His speech addressed the current international context - with a focus on global crises and emergencies - and reflected on the state of multilateralism and the United Nations system.

The UNGA President arrived here early Tuesday on a brief visit to Bangladesh to discuss global issues, including the Rohingya one.

He met Prime Minister Sheikh Hasina at her official residence Gonobhaban in the morning before his meeting with Foreign Minister Dr AK Abdul Momen.

He will observe the “vital work” undertaken by the UN Resident Coordinator and the UNHCR Representative.