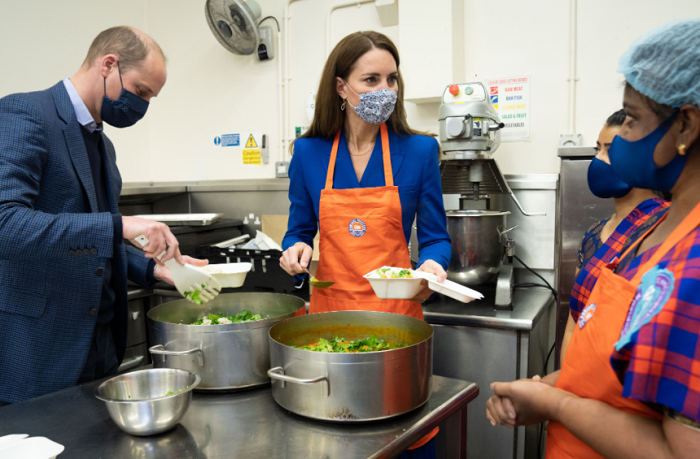 Britain's Prince William and his wife Kate Middleton tried their hands at making chapatis and dishing out curries as they joined the Sikh Sanjog group in preparing meals for the vulnerable people in Edinburgh, UK.

While making the chapatis and curry, Prince William reportedly even joked that Kate liked spicy food more than him. They helped the Singh Sanjog group at a cafe kitchen at the Palace of Holyroodhouse, the official residence of the Queen in Edinburgh. The Twitter handle of the Duke and the Duchess of Cambridge released several photographs of the couple helping out members of the Sikh group.

The caption read, “Cooking up a storm in the cafe kitchen at the Palace of Holyroodhouse with Sikh Sanjog, where the Duke and Duchess prepared meals to be distributed to vulnerable families across the Edinburgh community”.
In one of the photographs, the couple is seen dishing out vegetables into a food packet as a member of the Sikh group looks at them. In another, they make chapatis as the Duchess looks at Prince William and smiles. She is also seen enjoying the company of children in one of the photographs.

The Royal Family Channel also posted a video of the couple in the kitchen. It showed the Duke and Duchess learning how chapatis are made and enjoying the process.

When Kate was asked if she made curry at home, she reportedly replied: “Yes, I love it.” The Duke said, “She likes a bit of spice” and added that he is “not too good with spice.”

Sikh Sanjog thanked the Royals for joining them in the kitchen, adding, “The children and staff really enjoyed your company. We hope you gained a good understanding of why our services for women and young people are so vital, especially in challenging times.”

A number of people have praised the Royals for their service. They also congratulated the Sikh organisation for helping out the vulnerable and contributing to the society.

Sikh Sanjog, Scotland's only Sikh Family Support Charity, was set up in 1989 to support women from the Sikh community settling in Edinburgh. The organisation aims to empower women to advance their life opportunities through skills, confidence, and social inclusion. It provides social and wellbeing support for women of all ages. ‘Sanjog' means ‘linking' in Punjabi.

During the past year, while the coronavirus pandemic was raging, Sikh Sanjog set up a service to provide meals to disadvantaged people in the community, a service that is ongoing.