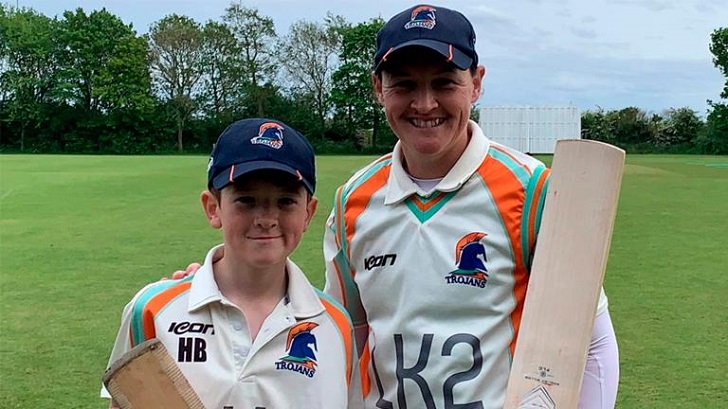 Former England women's cricketer Arran Brindle said she was as "proud as punch" of her son after the pair shared a match-winning century stand in a club game.

Brindle made 134 international appearances for England from 1999-2014, with the 39-year-old scoring unbeaten hundreds in both Test and one-day international formats.

But on Sunday, a player shortage meant she found herself playing for Owmby Trojans -- a team she coaches -- in the third division of the Lincoln and District League in central England.

The mother and son duo then combined to chase down Nettleham's score, sharing an opening stand of 143 in 32.3 overs to secure a 10-wicket win. Harry scored an unbeaten 32 while his mum finished 94 not out.

"In terms of any experience like that as a parent, you're as proud as punch," Brindle told Britain's PA news agency.

"Because they've achieved something -- sometimes they put too much expectation on themselves.

"As a parent, whether you're a mum or a dad, you just want your children to be happy with what they're doing.

"At the minute he seems to enjoy it."

Brindle, asked if Harry had enjoyed batting with his mother, replied: "I think so, he came off and he had a big smile on his face.

"He did what he needed to do -- we rotated the strike (and) he was able to put away the bad balls at the start."