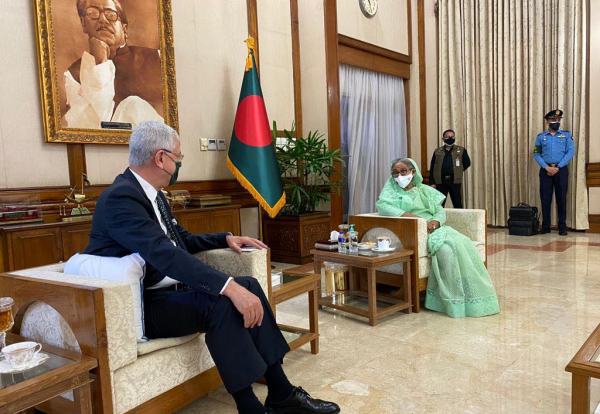 The President of the 75th session of the United Nations General Assembly Volkan Bozkır held a meeting with Bangladesh Prime Minister Sheikh Hasina on Tuesday.

They discussed issues related to the Rohingya and climate change.

Earlier, Volkan Bozkır arrived in Dhaka early this morning on a two-day visit to hold meetings with top government leadership and discuss the Rohingya crisis and shared challenges.

He is scheduled to visit Rohingya camps in Cox’s Bazar to see for himself the plight of the forcibly-displaced Myanmar nationals, who took temporary shelter amid persecution, ethnic cleansing and genocide in Rakhine state.

Later, he will meet bilaterally with Foreign Minister AK Abdul Momen at the Foreign Service Academy at 12:15pm which will be followed by a press conference there at 1pm.

The President will also deliver remarks to the Foreign Services Academy.

He will give the speech on Bangabandhu Lecture Series with the theme “Bangladesh and the United Nations” at 2:30pm at the Foreign Service Academy.

“His statement will address the current international context – with a focus on global crises and emergencies – and reflect on the state of multilateralism and the United Nations system,” according to the UN Information Centre in Dhaka.

He will be briefed on and observe the vital work undertaken by UN Resident Coordinator and the UNHCR Representative.