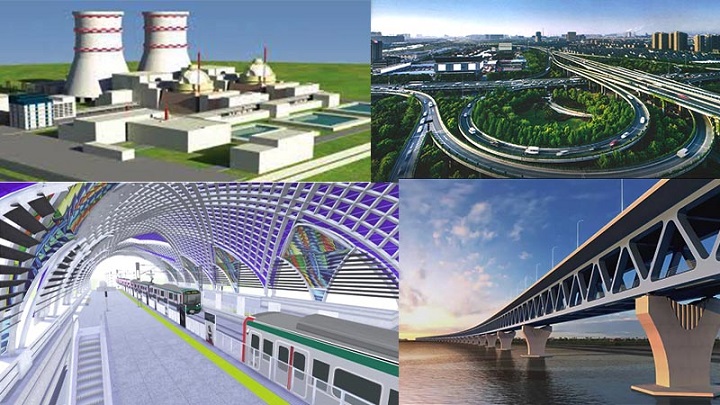 The government has set aside a total of Tk 497.71 billion or 22.09 per cent of the total ADP money for 10 mega projects to quickly implement the priority schemes.

The government has included nine projects in its fast-track project list. Of these top priority projects, the LNG terminal construction project has already been complete, while the Moitree Super Thermal Power Plant project’s funding is not included in the ADP.

The new megaprojects being funded under the ADP include Dhaka Mass Rapid Transit Line- 1 and Line -5, Bangabandhu Railway Bridge over the River Jamuna and Dhaka-Ashulia elevated expressway project.

These new projects and ongoing Karnaphuli Tunnel are being planned to be included in the fast-track list, which is monitored by the Prime Minister's Office.

The Rooppur Nuclear Power Plant fetched the highest allocation of Tk 184.26 billion in the ADP for FY 22. The project’s original allocation in the current fiscal year was Tk 156.91 billion which was later slashed to Tk 101.67 billion in the revised ADP.

Three metro rail projects--- MRT-6, MRT-1 and MRT-5-- as a whole got the second-highest allocation of Tk 79.74 billion in FY22, up from the current fiscal’s Tk 74.04 billion. Of those, the most advanced MRT-6 project from Uttara to Motijheel project fetched Tk 48 billion alone.

The Japan-funded Matarbari Coal-based Power Plant got the third highest allocation of Tk 61.62 billion in the new ADP. The priority project is getting Tk 19.62 billion more next fiscal year compared to its current fiscal’s Tk 42 billion.

The Padma Bridge project received Tk 35 billion in the ADP for FY22. The Tk 301.93 billion bridge is expected to open to the public by June next year after a slowdown caused by some technical and natural problems and the corona crisis.

The Padma rail link is being implemented to establish a direct Dhaka-Jashore rail link through the Padma bridge to reap the highest benefit of the under-construction mega infrastructure. The project got Tk 38.24 billion for the next fiscal year, which is Tk 16.31 billion lower than Tk 54.55 billion allocated in the current fiscal year.

New project –Bangabandhu Sheikh Mujib Railway bridge over the River Jamuna received Tk 35.80 billion of ADP money, up from Tk 20.57 billion in FY21. The project is expected to be complete by December 2023.

Another new project Dhaka-Ashulia elevated Expressway project got a much higher allocation of Tk 32.27 billion for the next fiscal year compared to the current fiscal’s Tk 7.15 billion as the government wants to accelerate the project next year.

The Dohazari-Gundum rail line will get Tk 14.25 billion, while the infrastructure facility project of Payra deep seaport fetched Tk 3 billion of the ADP fund for FY22.