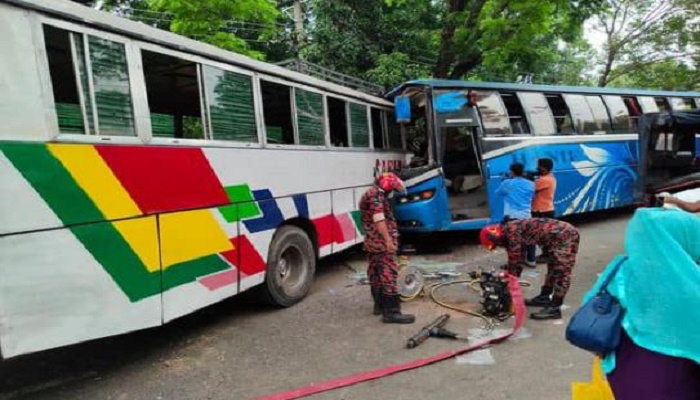 A man was killed and 13 were injured when two buses collided head-on in Choddopai area of Rajshahi on Monday afternoon.

The deceased was identified as Rabiul Islam (32), a resident of Chakchhatari of Rajshahi,

He was the driver of Afia Paribahan, an intra-district bus running between Rajshahi city and Charghat upazila.

The accident happened around 1:00pm between Rajshahi-bound Dhaka coach of Hanif Paribahan and the bus of Afia Paribahan that was heading to Charghat, said additional deputy commissioner of Rajshahi Metropolitan Police Golam Ruhul Kuddus.

According to locals and police, a three-wheeler auto-rickshaw came between the two buses during the accident.

On information, police rushed to the spot and they rescued one of the injured passengers of the auto-rickshaw.