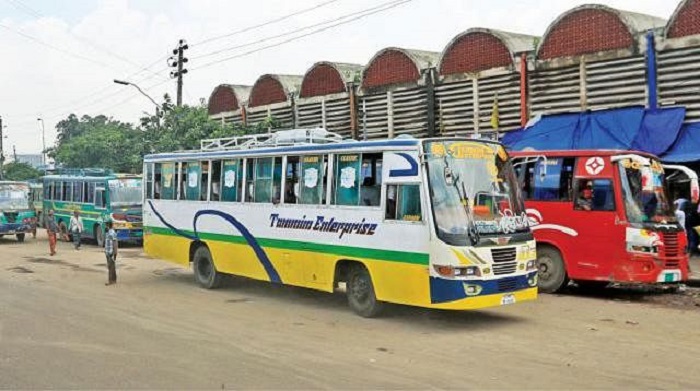 Passengers in Bangladesh heaved a sigh of relief as inter-district bus, train and launch services resumed at half of capacity on Monday, 59 days after the suspension amid the worsening Covid-19 situation in the country.

The resumption of public transport services has also brought smiles to the faces of transport workers and their owners as they remained idle for about two months with many of them losing jobs during the period.

Twenty-eight pairs of intercity trains resumed their services at half of the capacity, maintaining health guidelines after around two months, said Bangladesh Railway officials.

The train services in the country were suspended on April 5 as part of the government restrictions on people’s movement to stem the coronavirus transmission.

The authorities concerned have been asked to keep half of the train seats vacant for ensuring social distance, said a handout issued by the Railways Ministry on Sunday.

Passengers can purchase train tickets online, too, the handout added.

All concerned, including the passengers, have been asked to board trains with masks to contain the spread of Covid-19.

‘Joyontika Express’ left Sylhet for Dhaka around 11:15 am with a small number of passengers.

Shamim Ahmed, Sylhet Railway Station manager, said the number of passengers is low as the government suddenly announced the resumption of train services.

Other trains like ‘Parabat Express’ and ‘Udayan Express’ are scheduled to leave for their destinations soon.

Inter-district buses started plying highways from Sunday midnight, keeping up to 50 percent of their seats empty as per the government directives.

The government earlier allowed public transport to resume operations in city corporation areas from May 6.

Launch services resumed on Monday, after nearly two months, as those remained suspended as part of lockdown enforced to contain coronavirus transmission.

Joint Director BIWTA at Sadarghat terminal Gulzar said “The launch services resumed around 6 am with the operation of a Chandpur-bound launch. Later, the launch operation on other routes resumed.”

As Bangladesh battles with the Covid-19 pandemic, its health authorities recorded 28 more deaths and 1,354 cases in 24 hours until Sunday morning.

The infection rate rose to 8.90 percent from Saturday’s 8.41 percent while the mortality rate stood at 1.57 percent, said a handout issued by the Directorate General of Health Services (DGHS).

The new cases of infections were recorded after testing 15,205 samples.

With the fresh deaths during the period, the coronavirus fatalities rose to 12,376 in the country.

The total caseload now stands at 7,89,080 with the new ones, the handout added.