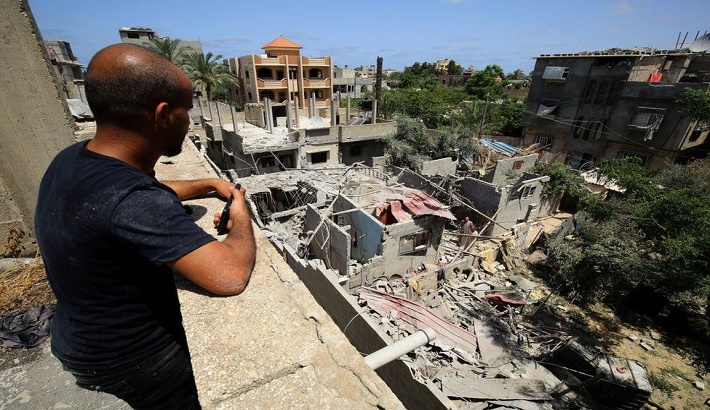 After the ceasefire, Palestinians in Gaza, who had stayed inside as much as they could while there was a chance of getting killed outside, walked round their neighbourhoods to get a better idea of what Israel had done.

People stopped to inspect huge piles of concrete rubble from the tower blocks that Israel had toppled. In some places the streets were blocked by rubble. Bulldozer operators were working overtime. Nothing they found was surprising. What has happened has been covered exhaustively on TV. But human beings like to see for themselves.

In Khan Younis, one of Gaza's towns, I went to the funeral of nine fighters who were killed in part of the tunnel network that Israel has targeted.

Israeli politicians and commanders have claimed that they have done serious damage to what they describe as an infrastructure of terror, run by Hamas and the smaller factions in Gaza. The damage to buildings is obvious. I have not been able to see underground military installations, but the talk here is that Hamas was shocked that Israel was able to kill its men when they believed they were safe underground.

Morale among supporters of the armed groups in Gaza is another matter. It seems intact, even enhanced by the 11-day war.

Khan Younis stopped for the funerals. Several thousand men prayed on a sports field and followed the stretchers carrying bodies wrapped in Palestinian flags, chanting their support on the way to the cemetery.

Israel and Hamas both claimed victory.

Hamas defines victory first of all as survival. Its leader in Gaza, Yahya Sinwar, emerged triumphantly from hiding the day after the ceasefire. But Hamas will also look at the political scorecard with some satisfaction.

Hamas slogans have been chanted after prayers 60 miles (96km) inland from Gaza, at the Al-Aqsa mosque in Jerusalem. Hamas has driven home a message to Palestinians that it is prepared to fight and accept sacrifices for their rights in Jerusalem. Israel insists that all of Jerusalem is its eternal and indivisible capital. Palestinians have other ideas.

The Palestinian President Mahmoud Abbas is recognised internationally as the representative voice of his people through his leadership of the PLO and the Palestinian Authority, which administers parts of the occupied territories and was intended in the now moribund Oslo agreements of the 1990s to develop into the government of an independent state.

But Palestinians are deeply dissatisfied with the president's performance. He cancelled elections due for May that he looked likely to lose. Palestinians have not been able to vote for a president or a legislature since 2006.

In contrast, a simple message from Hamas that it would fight to the death for Jerusalem resonated with Palestinians who despair at the inability of President Abbas to slow down, let alone stop, the steady increase of Jewish settlement, illegal under international law, on occupied land they want for a state.