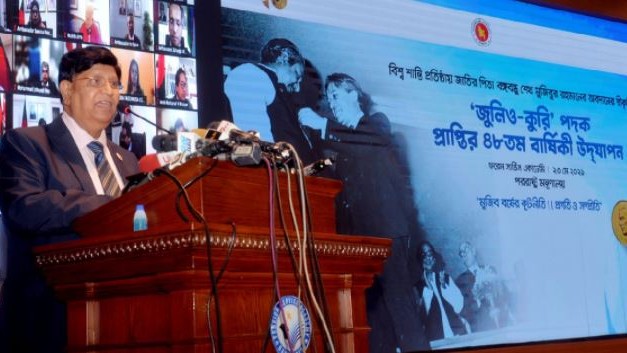 Bangladesh will host a two-day world peace conference in November this year, marking the ongoing birth centenary celebration of Father of the Nation Bangabandhu Sheikh Mujibur Rahman as part of promoting a culture of peace and tolerance.

Bangabandhu Peace Award will be introduced and conferred during the conference.

Foreign Minister Dr AK Abdul Momen said this on Sunday evening while addressing a discussion at Foreign Service Academy, marking the anniversary of Bangabandhu's Joliot Curie Peace Prize given in recognition of his contributions to world peace.

The Father of the Nation, who was a proponent of peace and addressing problems with dialogue, diplomacy and peaceful resolution of conflicts, was awarded the medal on May 23, 1973. It was the first international award to the newly-independent Bangladesh.

Dr Momen said the world peace conference will be organised with the participation of progressive personalities and intellectuals who are promoting peace in the world.

He said a special discussion will be on Bangabandhu during the world peace conference.

A committee has been formed to successfully hold the event, said the Foreign Minister.

He said Bangladesh is now a model country for peace following the path shown by Bangabandhu.

Bangladesh, under the leadership of Prime Minister Sheikh Hasina, is spreading the peace message across the world which is the "culture of peace."

A documentary on Bangabandhu was also screened.