Archers had to be satisfied with silver in World Cup 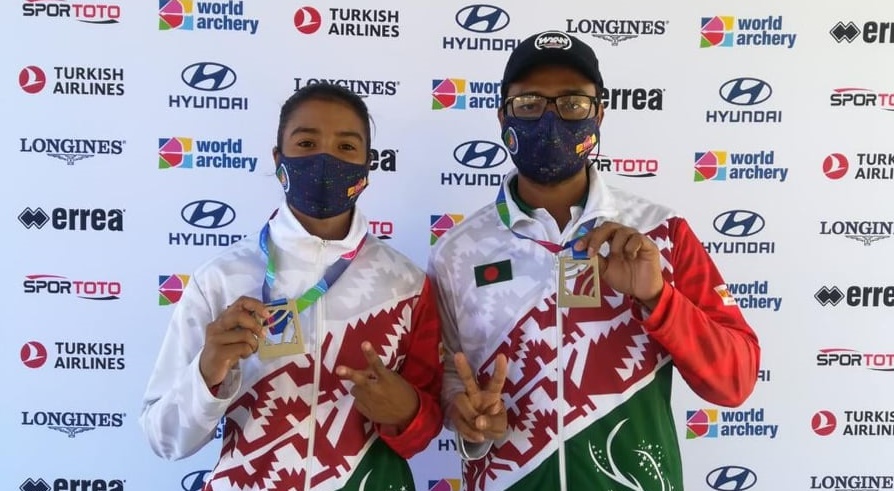 However, the silver medal is still Bangladesh's highest ever achievement in an Archery World Cup till the date after Shana won the bronze medal in the recurve men’s event in the 2019 edition of the same meet.

The Shana-Diya earlier pair created a new history when they qualified in the final of an Archery World Cup after beating Canada by 5-3 set points in the semifinals on Thursday.

Diya, who ranked 325th in the world recurve women’s rankings and represented Bangladesh for the first time in an Archery World Cup, blamed her lack of experience that prevented her from winning the gold medal.

“Actually, we need to gain more experience in these big competitions. I'm almost a newcomer here, I've no experience of the world championship However, I’m satisfied with the result,” said Diya.

Shana was satisfied with his silver winning feat in the World Cup.

“We’ve created a new history by qualifying in the final and then earning a silver medal. Thanks to my teammates, coaches, my service team Ansar, Archery Federation, Olympics Association, sponsors and sports ministry for supporting us,” said Shana, who ranked 13th in the world recurve men’s ranking.

Shana and national team head coach Martin Frederick, who were previously announced as Breakthrough Athlete of 2019 and Coach of 2019 by the World Archery Federation, received their crests after the day’s final match. The apex body of world archery released the names of the awardees on their website in February 2020. The winners were decided by the public and experts’ votes throughout January that year.