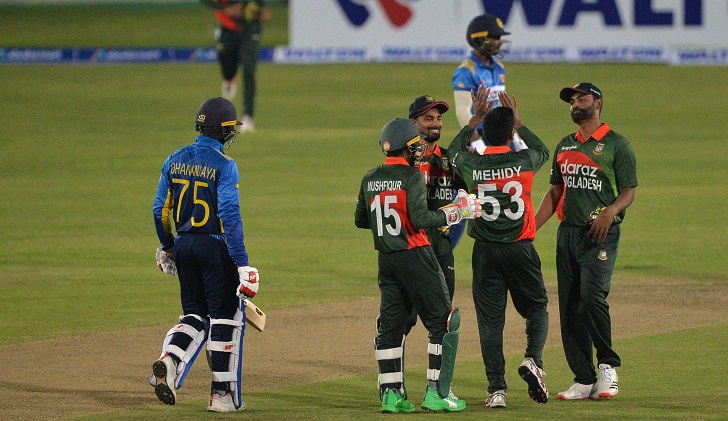 Bangladesh ended their 10-match winless streak in international cricket beating Sri Lanka by 33 runs in the first game of the three-match ODI series at the Sher-e-Bangla National Stadium in Dhaka on Sunday.

Off-spinner Mehidy Hasan played a key role in their victory as he finished with 4-30 while Mustafizur Rahman and Mohammad Saifuddin picked up three and two wickets respectively to bowl the visitors out for 224 runs in 48.1 overs.

Earlier, Mushfiqur Rahim (84 off 87 balls), Mahmudullah (54 off 76 balls) and Tamim Iqbal (52 off 70 balls) all scored fifties that guided the hosts to 257-6 in their stipulated 50 overs after they opted to bat first in a hot and humid condition in the capital.

The series opener hit the ground after unfolding a drama as five members from Bangladesh and Sri Lanka teams tested positive for Covid-19 a day before the match which put the fate of the series in serious doubts.

However, after all the members of both the teams underwent another test on Saturday and everyone except Sri Lankan uncapped pacer Shiran Fernando tested negative, the match started in due time.

Sri Lankan part-time off-spinner Dhananjaya de Silva (3-45) then struck twice in successive deliveries to remove Tamim and Mohammad Mithun (0) to bring his side back in the contest but Mushfiqur and Mahmudullah’s 109-run stand for the fifth wicket took Bangladesh over the 200-run mark.

Mushfiqur, who was eyeing to complete his eighth ODI ton, gave away his wicket at third man region off chinaman Lakshan Sandakan while trying to play a foolish reverse sweep that broke the century stand.

Bangladesh’s lower middle-order batsmen then failed to accelerate the innings as they could make only 49 runs off 41 balls after Mushfiqur’s dismissal which prevented them from posting a big total.

Mushfiqur was adjudged player of the match.

Sri Lanka’s chase started in a similar fashion as Mehidy gave Bangladesh the first breakthrough by dismissing opener Danushka Gunathilaka for 21 in the fifth over while Mustafizur removed Pathum Nissanka for eight to take the hosts on top.

Mehidy then took three quick wickets, all bowled, while Shakib dismissed Kusal Mendis for 24 that reduced the visitors to 102-6 in the 28th over.

All-rounder Wanindu Hasaranga (74 off 60 balls) then put up two crucial stands of 47 and 62 runs with Dasun Shanaka (14) and Isuru Udana (21) respectively to bring some excitement in the game but after his dismissal to Saifuddin, it was only a matter of time for Bangladeshi bowlers to complete the win.

The second one-dayer will take place on Tuesday at the same venue.