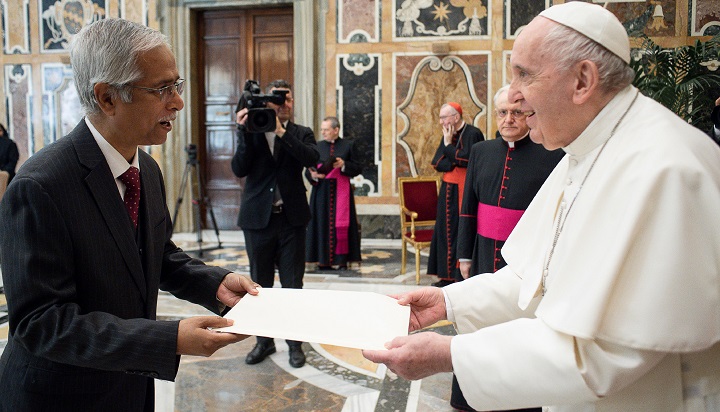 Pope Francis has lauded Prime Minister Sheikh Hasina for her visionary leadership in advancing the remarkable development of Bangladesh over the last decade.

The Pope, who is head of the Catholic Church and Sovereign of Vatican City State, made the praiseworthy words about Prime Minister Sheikh Hasina when the newly appointed Bangladesh Ambassador to the Holy See Mustafizur Rahman presented credentials as the non-resident Ambassador at a pompous ceremony held at the Apostolic Palace in the Vatican City on Saturday (May 22).

Envoys from eight other countries also presented credentials to the Pope on the same occasion.

After receiving the Credentials, Pope Francis briefly addressed the newly appointed Ambassadors. He called on all nations to build a global ‘culture of care’ based on mutual cooperation, compassion, humanity and justice in the face of the ongoing pandemic.

He reiterated his personal commitment and support for building a peaceful, tolerant and harmonious society.

He also urged the world leaders to take stronger and more effective steps to address the contemporary global challenges, including migration and climate change.

At the end of his address, Pope Francis spoke to each of the Ambassadors separately.

The Bangladesh Ambassador conveyed the messages of greetings from the President and Prime Minister of Bangladesh to the Pope.

Mustafizur Rahman highlighted the historic celebrations of the golden jubilee of Bangladesh's independence and Birth Centenary of Father of the Nation Bangabandhu Sheikh Mujibur Rahman, recognition of Bangladesh's graduation from a Least Developed Country, remarkable achievements of the present Government in socio-economic development and the Government’s success so far in tackling the COVID-19 disease.

He also briefed the Pope on Myanmar's lack of genuine political will in resolving the Rohingya crisis and sought his active support in mobilizing the international community to ramp up pressure on Myanmar.

In this regard, Pope Francis highly praised the Bangladesh Prime Minister Sheikh Hasina's generosity in providing shelter and continued assistance to the forcibly displaced Rohingyas.

Recalling his meeting with the Prime Minister at the Vatican City in 2018, Pope also lauded her visionary leadership in advancing the remarkable socio-economic development of Bangladesh over the last decade.

He requested the Bangladesh ambassador to convey the greetings to the President and Prime Minister on his behalf.