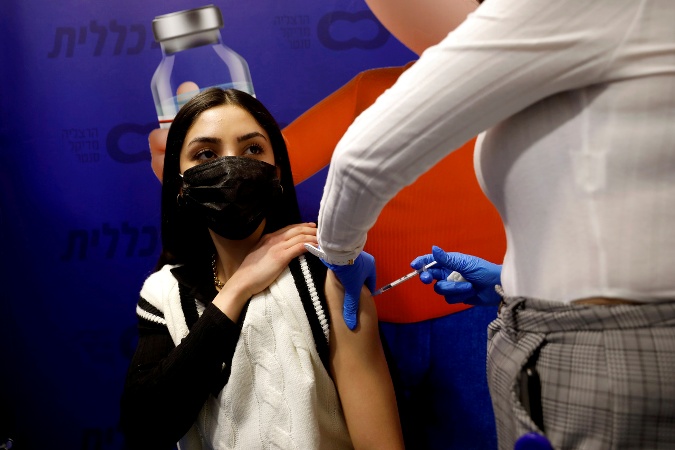 The Pfizer and AstraZeneca coronavirus vaccines are highly effective against the variant identified in India after two doses, a study has found.

Two jabs of either vaccine give a similar level of protection against symptomatic disease from the Indian variant as they do for the Kent one.

However, both vaccines were only 33% effective against the Indian variant three weeks after the first dose.

This compared with 50% effectiveness against the Kent variant.

Public Health England, which ran the study, said the vaccines are likely to be even more effective at preventing hospital admission and deaths.

Health Secretary Matt Hancock said the findings made him "increasingly confident" that the government was on track for the final stage of easing restrictions in England on 21 June.

He said: "I'm increasingly confident that we're on track for the road map because this data shows that the vaccine after two doses works just as effectively [against the Indian variant], and we all know that the vaccine is our way out of this."

The health secretary added that the data showed that getting both doses of the vaccine was "absolutely vital".

The Pfizer vaccine was found to be 88% effective at stopping symptomatic disease from the Indian variant two weeks after the second dose, compared with 93% effectiveness against the Kent variant.

The AstraZeneca jab was 60% effective against the Indian variant, compared with 66% against the Kent variant.

Public Health England (PHE) said the difference in effectiveness between the vaccines after two doses may be explained by the fact that rollout of second doses of AstraZeneca was later than for the Pfizer vaccine, which was approved first.

Other data shows it takes longer to reach maximum effectiveness with the AstraZeneca vaccine, PHE said.

The study looked at data from all age groups from 5 April, to cover the period since the Indian variant emerged.

There is not enough data to estimate how effective the vaccine is against severe outcomes for the Indian variant, PHE said.

Dr Jamie Lopez Bernal, consultant medical epidemiologist at PHE and the study's lead author, said there was higher confidence in the data from the first vaccine dose than that from the second.

He said: "There are bigger numbers that have been vaccinated with one dose. So I think we classify that as moderate certainty around the first dose, but low levels of confidence around the second dose."

However, Prof Susan Hopkins, PHE's Covid-19 strategic response director, said the data trend was "quite clear" and was heading in the "right direction".

Meanwhile, Gordon Brown has urged Prime Minister Boris Johnson to use next month's G7 summit in Cornwall to step up funding of the global Covid vaccine rollout.

In an interview for BBC Radio 4's The World This Weekend, the former prime minister said what rich countries had given so far would not meet the needs of this year and next year.

In other news, more than 50 million coronavirus vaccine doses have now been given in England. More than 31 million people have had their first jab, and over 18m have had their second.

Some 13,000 deaths and 39,100 hospitalisations have been prevented in the UK due to the vaccination programme up to 9 May, according to PHE analysis.