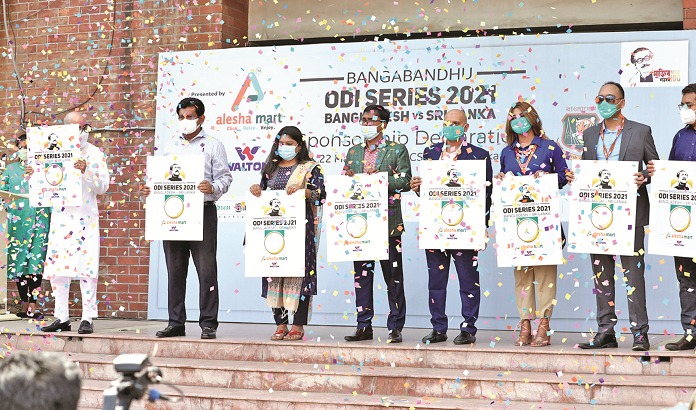 Alesha Mart, an e-commerce company, has acquired the title sponsorship rights of Bangladesh national cricket team’s home series for the next two years at the cost of Tk 32.55 crore.

Alesha Mart, a sister organisation of Alesha Holdings Limited, will start their partnership with Bangladesh Cricket Board from Bangladesh’s three-match one-day international series against Sri Lanka, starting today at the Sher-e-Bangla National Stadium.

Walton will remain as an associate sponsor, also known as ‘powered by’ during the tenure while Impress Matra Consortium will assist them as title and ground branding holder.

The announcement was made during a press conference held at the National Cricket Academy premises on Saturday.

BCB earlier last week sold its broadcast rights to Ban Tech Limited for the national team’s home series till 2023 for TK 161.5 crore (USD 19 million approximately) while Daraz, an online marketplace and logistics company that operates in South Asia and Southeast Asia, became the sponsor of all BCB teams for the next two years.

HungryNaki, an online food delivery provider and an affiliated company of Daraz, is currently the kit partner for BCB.